You are Here: Home » News » News Headlines » Council signs up to national campaign against modern slavery

Council signs up to national campaign against modern slavery 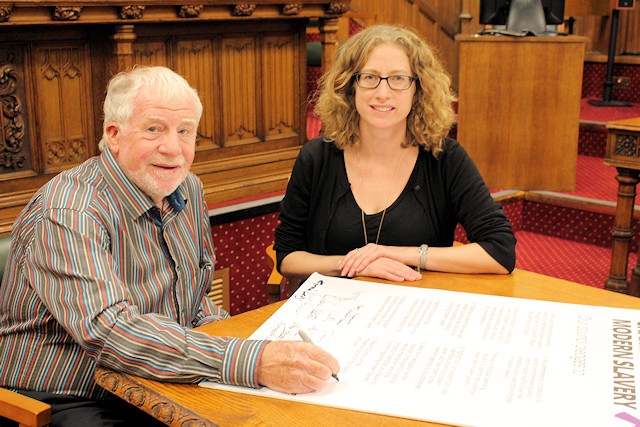 A national campaign which is calling for the eradication of modern day slavery has been backed by Rochdale Borough Council.

The Charter Against Modern Slavery was signed by Councillor Allen Brett, leader of the council, following approval at the recent cabinet meeting at Number One Riverside.

An initiative of the Co-operative Party, the charter commits all local authorities to continue ensuring its contractors and supplies comply with the Modern Slavery Act 2015, including a commitment to the ethical procurement of goods and services.

Staff across the council and its partner organisations are specially trained to recognise and challenge signs that any contractor may be using modern slaves.

The charter, which is supported by councils across the country, is also designed to tackle any slavery, servitude, forced, or compulsory labour, human trafficking and exploitation across local communities.

It is estimated that around 13,000 people a year living in the UK are victims of modern day slavery.

Councillor Brett said: “I am proud to have signed this charter, which reinforces our united commitment to ending the horrific scourge of modern day slavery. It is a scandal that nearly 200 years since the abolition of the slave trade that such barbaric practices are still prevalent in parts of our society. There are lasting links between our borough and the Co-operative movement so I commend them on this important campaign, which goes to the heart of our Rochdalian principles of equality, tolerance and decency.”

Councillor Liam O’Rourke, cabinet member for resources, said: “This charter sends an important message that quite simply we will not tolerate the evils of modern day slavery. Rochdale borough has a proud Co-operative past and, as a council, we are leading the way in ensuring we eradicate slavery from our society for good. As cabinet member with responsibility for Co-operative issues, I am delighted and honoured to be supporting this excellent and worthy campaign.”

Claire McCarthy, general secretary of the Co-operative Party, said: “Standing up against slavery is in the Co-operative Movement’s DNA, and I am delighted that Rochdale, the crucible of the Co-operative Movement, is at the forefront of tackling modern slavery. By signing the charter, Rochdale Borough Council is not just setting new standards for ethics and transparency in its own supply chain, it is sending out a powerful message that the perpetrators of these appalling crimes have nowhere to hide.”