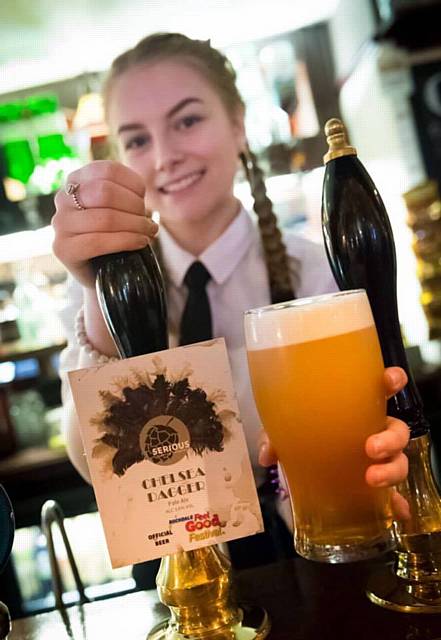 Real Ale at The Flying Horse

Three of Rochdale centre’s pubs have returned from the Rochdale, Oldham and Bury branch Campaign for Real Ale Awards with a full sweep of CAMRA titles.

The Flying Horse Hotel on Packer Street defended its Overall Pub of the Year status, winning the title for the third year running, whilst the Regal Moon was awarded Cider Pub of the Year and Drake Street’s Cask and Feather winning Most Improved Pub of the Year.

Rochdale Town Centre Manager, Paul Ambrose said: “In a few short years Rochdale centre has become a true destination for beer lovers across the country and I congratulate the three pubs for winning their awards.

“While each of the pubs offers something unique to their visitors, they all share the foundation of what makes a great pub – a warm and welcoming atmosphere, excellent service and a fantastic range of ales.”

The Flying Horse Hotel’s Ben Boothman said: “It really is so special to win this award again. It shows we have been hitting a level of product and service that’s needed to impress the CAMRA members and judges. These beer enthusiasts know their ale so it’s a hard job keeping the cellar to a standard required.

“Craig and I can’t thank the staff enough for this; they really do care about not just beer but the pub. A huge thank you also goes out our brilliant customers.”

He added: “It just shows how good Rochdale town centre is with our other fantastic venues bringing folk from far and wide. After 20 or so years working in the centre, I can honestly say it really is on the up.”

Landlady of the Cask & Feather pub, Terri Hernon said: "It's so nice to be recognised for for the hard work we are putting in and we have a lot more changes to come in the future as well. I would like to say thank you to every one for supporting us and I am over the moon with this achievement."

Councillor John Blundell, Cabinet Member for Regeneration, Business, Skills & Employment said: “To scoop such coveted awards from CAMRA is another feather in the cap for Rochdale’s burgeoning social scene and I’d like to extend a huge congratulations to the Cask and Feather, The Regal Moon and the Flying Horse.

“With fantastic real ale character pubs and new bars, like the Medicine Tap and Vicolo Del Vino, as well as old favourites like the Baum and La Mancha, Rochdale is a great place to go for a night out and it will become even more popular when our fantastic retail and leisure development, Rochdale Riverside, opens next summer.”

CAMRA committee member Peter Sheldon added: “Out of Greater Manchester, which has nine CAMRA branches, Rochdale is without a doubt the place to enjoy a few beers, and it is only going from good to better.”

The Campaign for Real Ale, CAMRA, was founded in 1971 by a few real ale enthusiasts at a time when traditional rich-flavoured ales, were being replaced by brewers producing beers with less demanding production and storing techniques.