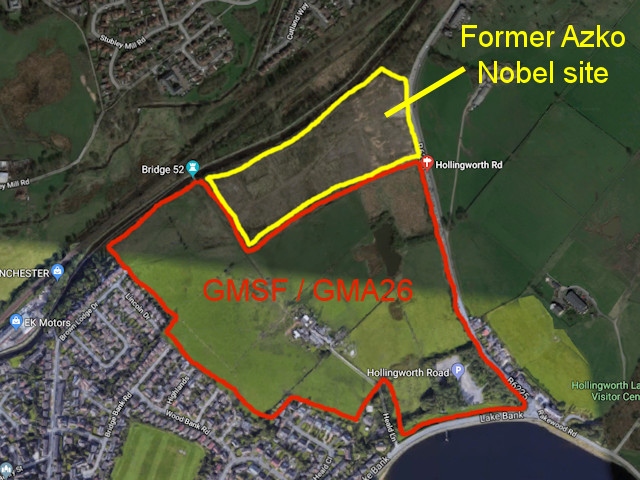 Land at Lower Cleggswood, near to Hollingworth Lake in Littleborough

Littleborough Civic Trust is concerned over the development of green belt land near to Hollingworth Lake that has been included in the Greater Manchester Spatial Framework (GMSF/GMA26).

Land Registry documents obtained by the Trust, and seen by Rochdale Online, indicate that an Option to Purchase agreement for the whole of the GMA26 area of land was signed by the landowners and a developer, Bloor Homes, based in Derbyshire, on 5 November 2018.

The Trust says a letter from Homes England confirms that developer Bloor Homes and Homes England have also had an initial consultation regarding the former Akzo Nobel site land, which adjoins the GMA26 area of land at Lower Cleggswood.

The site was purchased by Homes England (trading name of the Homes and Communities Agency, a Government Organisation) in 2017.

The development of the Azko Nobel site, which links Littleborough town centre and Hollingworth Lake, has been controversial with concerns consistently raised over contamination and the location of mine shafts.

Plans for 174 residential homes were approved in January 2015, despite objections from local residents.

Ian Jackson, Chairman of the Civic Trust said: "Homes England assured us that they would come back to discuss their proposals before any decisions were made. This was after we met some 10 months ago and shared information with them which has not yet been released to the public. It is our intention to do just that."

A Homes England spokesperson said: "Homes England is currently seeking technical advice on planning options for the Akzo Nobel site prior to disposing to a developer and will be working with the Trust to ensure we understand and can help resolve any outstanding issues."

Mr Jackson added: "I would urge anyone who is concerned about the future of our village to come and hear what our councillors have to say at the next Littleborough and Wardle Community Meeting.

"There is an ‘Open Forum’ during the meeting where anyone can raise any issues."

If you would like to raise an issue, there will be an opportunity during the agenda item Open Forum.