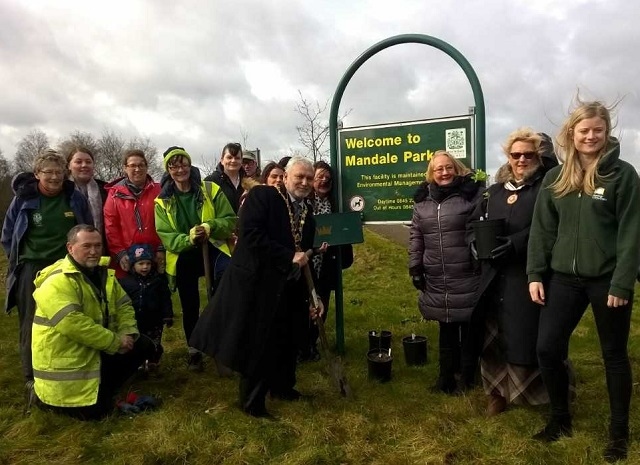 Trees were planted in Mandale Park in a ceremony that was overseen by Mayor Mohammed Zaman and Viv Carter, Deputy Lieutenant, and service users from Rochdale Connections Trust's (RCT) Domestic Abuse Programmes on Friday 15 March.

The trees are part of the fifty thousand trees which have been distributed across the UK; forming part of the Queen’s Commonwealth Canopy, a network of forest conservation initiatives to mark Her Majesty's lifetime of service to the Commonwealth.

Jenny Miller, Domestic Violence and Abuse Lead at Rochdale Connections Trust, applied for a pack of trees and donated them to the charity.

Each specially-branded tree pack contained five UK-sourced and grown native broadleaf trees, two silver birch, two rowan, and a hazel, for communities to plant as their own contribution to the Queen’s Commonwealth Canopy.

Jenny said: “This initiative provided us with a fantastic opportunity to engage service users in an activity that contributes to the local environment, the Commonwealth and simultaneously provides a focus on growth.

“This is symbolic to many of our ladies who have suffered horrendous incidents of prolonged abuse, but who have broken free and are beginning on their journey of personal growth and development.

“I hope those involved will enjoy watching them flourish as part of this wonderful legacy initiative.”

“RCT would like to extend a huge thanks to members of Rochdale Council’s green volunteer scheme and Bob Bevan, Park Ranger who are all working tirelessly to transform Mandale Park into a local nature reserve.”

The trees planted by Rochdale Connections Trust will be part of a bigger scheme to increase the tree coverage in the park with the help of more trees being donated by ‘City of Trees'.

Following the ceremonial planting by the Mayor, volunteers from the green volunteer scheme took the trees further down into the park to an area of a field that has a steep banking which is to have additional planting added to it to link up two wooded areas later in the year.

The giveaway by the Woodland Trust was in support of a landmark documentary, The Queen's Green Planet, screened last April.

It followed Her Majesty the Queen and the ambitious Queen's Commonwealth Canopy legacy project which brings together her deeply held commitment to the Commonwealth and her love of trees.

At the heart of the film by ITN Productions was a conversation between the Queen and Sir David Attenborough filmed in the gardens of Buckingham Palace last summer.