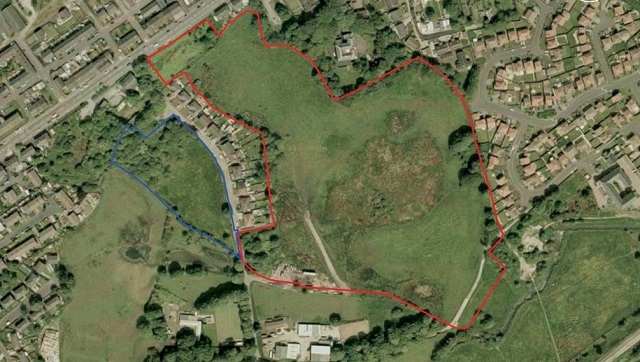 Plans have been submitted for a hundred new homes on fields next to land which has already been controversially earmarked for a huge new housing estate.

Russell Homes was granted permission to build up to 110 properties on a 16-acre plot, off New Road, in Littleborough, back in 2015 on the condition it came back with a more detailed scheme for councillors' approval.

Now the developer has now come forward with full plans for the development, including details of a new access road, the appearance of the homes and their surrounds, and the relocation of a bus stop.

The land in question sits between New Street and Sawmill Way, just to the east of the contentious Roch Valley site earmarked for 210 homes in the latest draft of the region’s 20-year development plan.

The estate would include a mixture of two, three and four-bedroom houses, featuring a mix of red-brick and stone facades and bosses say every care has been taken to ensure the design complements the character of the area.

In a design and access statement accompanying the application, Russell Homes claims the project would bring a host of benefits to Littleborough.

It says: “The scheme will enhance the surrounding area in terms of its aesthetic, landscape and ecological value, whilst delivering much needed starter and family homes to an exceptional quality.”

While not designated green belt the site in the Wardle and West Littleborough ward is previously undeveloped and classed as open protected land by Rochdale Council.

Ward councillors and many residents oppose developing on non-brownfield sites in the area, citing the adverse impact on local infrastructure particularly the often-gridlocked roads.

He said: “I have opposed the application all the way along, but I have got to be realistic, it has been granted and I don’t think anyone would expect this can be overturned suddenly.

“The application was granted, it was just the details that had to be changed.

“The reason it was moved 30 years ago was for safety reasons. Now, 30 years later when nobody can deny the road is busier, they are moving it back to the position it was in before.

“I would love to see the application refused, but you have to be realistic.”

Of the 100 homes, 85 will be sold at market value while 15 are classed as affordable properties.

Of the affordable homes eight are earmarked for social housing and seven for intermediate housing. The latter category are provided at a cost above social rent, but below market levels.