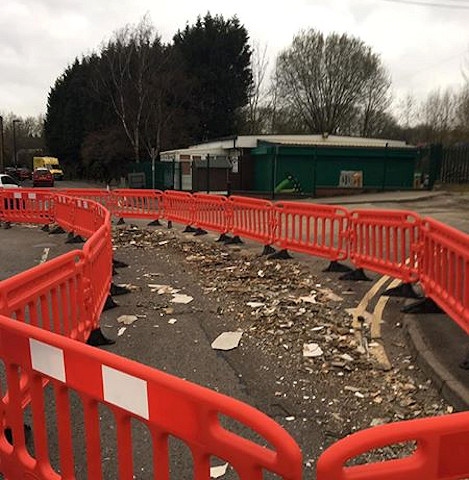 Local residents reported sightings of the hazardous substance scattered in various places around the village, including outside a pre-school on Charles Lane, at the top of Moy Hill, under the M62 motorway bridge, Water Lane and on New Street.

The waste outside the pre-school is understood to have slid from a flatbed van as one resident, Wendy Buckley, said she was driving behind the van when the asbestos fell.

She posted online: “I was driving behind the flatbed van that was dropping that, the back and sides were down, and it was sliding off as it turned up the road towards the preschool. I couldn’t get the number plate as it was covered.”

The pre-school is understood to have closed on Tuesday whilst the mess was cleared up.

It is unknown if all reports of asbestos around the village are linked.

Mark Widdup, director of neighbourhoods at Rochdale Borough Council said: “We’ve been working with specialist contractors since late last night to remove the fly-tipped asbestos as safely and quickly as possible. There is CCTV evidence available and our enforcement teams are currently investigating.

“We investigate all complaints of fly-tipping and won’t hesitate to take action against those people who dump waste.

“We encourage anyone who has any information about fly-tipping to report it at: rochdale.gov.uk/flytipping or by calling 0300 303 8884.”

Penalties for fly-tippers include a fine up to £50,000 and/or five years prison and antisocial behaviour orders.