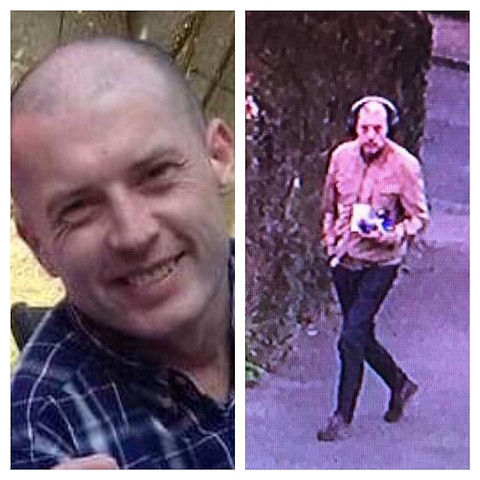 Mark Conroy was last seen in Rochdale (right) on 30 March

A man missing from Dublin was last seen in Rochdale on Saturday 30 March.

Mark Conroy was last seen near the Crown Oil Arena, Spotland, that morning, believed to be looking for family who live in that area.

His father, Mick Conroy, of Dublin, Republic of Ireland, says the family are getting very worried as no-one has heard from Mark, and do not know if he is still in Rochdale or elsewhere.

Mick said: “Mark has been missing from his home here in Dublin since Thursday 28 March. Mark was last seen knocking on random doors near the Spotland Stadium on the Saturday morning, asking people if they knew where my sister and her husband lived as they live in Rochdale.

“One person was concerned enough to take a photo of Mark, the photo with the headphones. We haven’t heard or seen him since. His phone is turned off and he hasn’t contacted anyone despite a widespread sharing of his missing status on social media.

“He has been reported missing to the Gardaí in Ireland [Ireland’s national police force] and police in Rochdale know.

“I am dealing with the guards daily at the local station in Coolock, but we are getting very worried.”

Greater Manchester Police and the Gardaí have been contacted for comment.