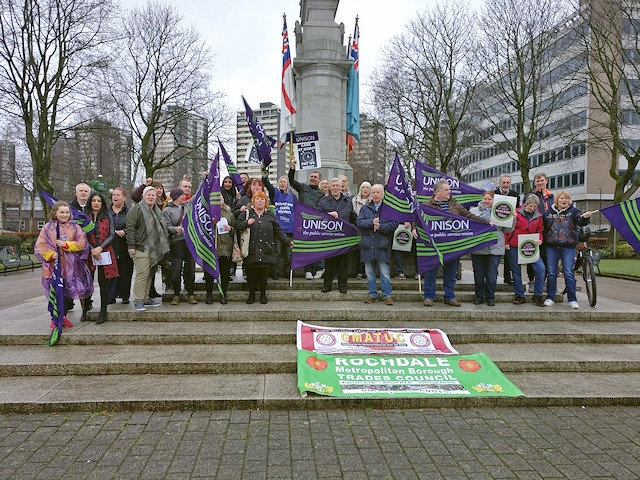 Employees of Alternative Futures Group (AFG), who take care of vulnerable adults, continue to strike after being told they are going to see a cut in 'top-up' payments for sleep-in shifts.

Public service union, Unison has released figures claiming AFG takes a 29% cut for themselves before paying staff what is left, with all but Rochdale and Warrington paying more than the £73.89 per shift that would cover the minimum wage rate for staff.

AFG receives funding from 15 public authority commissioners across the north west; the amounts the commissioners pay toward the cost of employing staff to work sleep-in shifts vary.

In Rochdale, Unison says the amount paid to AFG per sleep-in shift is £70, with the actual amount being paid to staff being just £49.98.

Additional figures from the union say AFG’s company accounts show high and rising overhead costs, plus a higher percentage of its income paid to top managers than all of its competitors.

Staff have received great support for their strike action, with a public petition amassing some 13,000 signatures.

Paula Barker, Unison North West Regional Convenor, said: “AFG are taking an enormous cut out of the public money that is intended for the pay packets of low-wage care staff.

“They are spending a growing amount on company overheads and they choose to pay their executives more than their competitors do. They have the wrong priorities and they should instead be investing in their front-line care staff and in the service.

“AFG can’t have it both ways – they can’t raid this money for executive pay and overheads and then say that they can’t pay care workers the minimum wage because other income is ring-fenced.

“There are councils in the north west who should be paying more to ensure that staff receive at least the minimum wage for working sleep-ins. Unison has written to Rochdale and Warrington councils to express our concern that they are paying too little. But overall, we reject AFG’s assertion that they cannot afford fair pay in the North West.

“We would love AFG to join our Dignity in Social Care Campaign to help argue for fair funding, decent jobs and quality services. But first AFG must do the right thing and reverse these damaging pay cuts.”

Unison adds that other care providers, with similar commissioning arrangements, do pay the minimum wage for sleep-ins, and this is the expected practice of both local and central government.

Andrea Fallon, the council’s interim director of adult services, said: “There has been no reduction in the sleep-in rates we give to providers and any decisions about the pay levels for carers are a matter for individual care providers, not the council.

“We can assure service users and their families that we have a robust plan in place to ensure their care services will be delivered as normal.

“The individual care needs of our residents will always be our number one priority.”