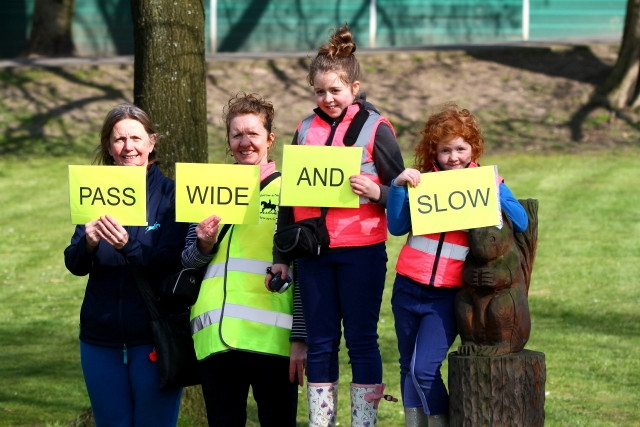 Horse riders came together in Milnrow Memorial Park for a road safety awareness ride on Sunday 14 April, as part of a nationwide campaign to ‘Pass Wide and Slow’.

Organised by the Milnrow & Newhey Bridleways Group, 20 riders set out in hi-vis vests, printed by BAM Designs, to share the message about safely passing horses on the roads.

Gill Bill, a member of the Bridleways Group, said: “The Milnrow & Newhey Bridleways Group committee would like to thank everyone for attending our event. It was fabulous to see so many riders joining together to make this campaign a success.

“We would like to express a special thank you to Nicola Tonge for arranging the event, Andrew from Alpha Digital Media for taking photographs and Councillor Andrew Kelly for his support.

“It has been confirmed that 53 Pass Wide and Slow rides have taken place; hundreds of riders have taken to the roads across the country this weekend aiming to educate drivers on passing horses safely.

“Once again thank you to everyone involved, your support is very much appreciated.”

The campaign has come via a petition to make it a legal requirement to pass horses slowly with a wide berth, in addition to other road users abiding by the rider’s hand signals, as horses can be easily scared by cars that don’t take care when passing them.

The Highway Code warns motorists to 'be particularly careful of horse riders and horse-drawn vehicles especially when overtaking. Always pass wide and slowly. Horse riders are often children, so take extra care and remember riders may ride in double file when escorting a young or inexperienced horse or rider. Look out for horse riders’ and horse drivers’ signals and heed a request to slow down or stop. Take great care and treat all horses as a potential hazard'.

References to ‘road’ generally includes footpaths, bridleways and cycle tracks, and many roadways and driveways on private land (including many car parks).

Alarming new statistics from The British Horse Society have revealed nearly two horses a week are being killed on UK roads, with 845 incidents involving horses and drivers reported last year.

In the last year alone, 87 horses and four people have been tragically killed whilst riding on the roads and 73% of incidents reported occurred due to vehicles passing by too closely.

In 2017, a horse was left with serious injuries after being hit by an impatient driver on Manchester Road in Castleton. Insufficient space was left when attempting to overtake a horse and rider plus a parked car.

The BHS launched its ‘Dead Slow’ road safety campaign in 2016 to help better educate drivers on how to pass horses on the road: