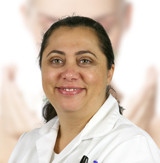 Gisela Gonçalves from Rainbow Well-being Therapy Centre in Heywood is having her work recognised by different institutions.

Since becoming the Public Health Ambassador for the Rochdale borough for the charity Public Health Collaboration (PHC), which aims to raise awareness about diabetes and healthy eating, Gisela, who last year received a master’s degree in nutrition and health, has been helping medical centres and GPs to set up a strategy to improve people’s eating habits and fight back against obesity and diabetes.

Gisela said: “I came to live in the UK in 2007 and I was accepted by the Heywood community. I have opened my business and I have been very fortunate with my success rate as a professional and with the trust and friendship I have established with my patients.

“In 2012, I was a volunteer for the Olympic games because I thought it was a way of saying thank you to the country for the opportunity. Now, I continue to say thank you one way or another. It has been 12 years of hard and long working days.

“To see my work being recognised, it is gratifying and inspires me to go on doing as much as I can for the community, for my patients and for the public in general.”

One of Gisela’s case studies, testing the effects of holistic measures on cholesterol, fasting blood glucose and general wellbeing, is to be presented in a PHC conference in May this year at the Royal College of General Practitioners in London.

The unnamed patient, a 60-year-old woman, presented with numerous symptoms, such as constant pain, acid reflux, bloating, headaches and red rashes on her hands and feet.

She also reported constant vomiting and was diagnosed with a variety of illnesses, including gallstones, type II diabetes, an underactive thyroid, and high blood pressure.

The patient was treated with acupuncture and massage treatments once a week over 14 weeks and given dietary advice in line with Chinese medicine, given a low-carb diet, and supplemented with vitamin C, omega 3, 6 and 9, and goji berry.

Gisela added: “In this case, integrating acupuncture and massage reduced pain, including intake of goji berry.

“The patient’s blood cholesterol and glucose levels reduced substantially, her energy levels increased, and the feeling of well-being was restored.”