You are Here: Home » News » News Headlines » Here’s how this group of volunteers are fighting against grooming and child sexual exploitation 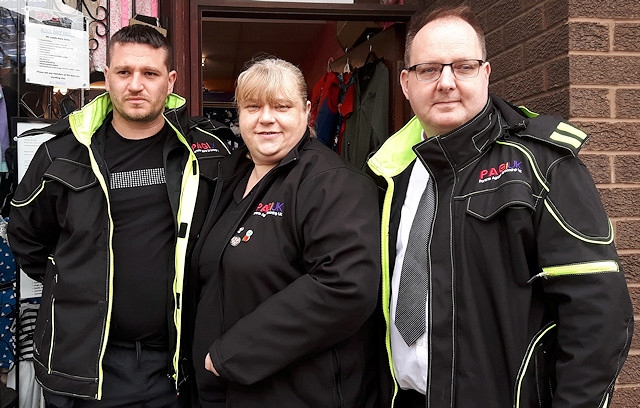 A group of volunteers are steadily working to give survivors of child sexual abuse a voice from their walk-in centre in Rochdale.

Keen to share the word about how Parents Against Grooming UK (PAG UK) has been helping people in Rochdale, Rochdale Online was invited to visit the centre and find out more about how the volunteers are tackling grooming and child sexual exploitation.

The centre, opened on 2 February 2019 by Knowl View whistleblower Martin Digan, is described by the volunteers as a place of safety, and indeed it does feel like sitting down with a friend.

The PAGUK team is made up of about 20 volunteers, with qualifications hanging on the wall as soon as you enter their premises on Yorkshire Street – safeguarding, adult social care, first aid, adult and child mentoring, conflict management, domestic abuse are just some of the words that immediately jump out of the team’s many certificates.

Those conducting one-on-one sessions have been Disclosure and Barring Service (DBS) checked. Front of house staff are awaiting results from their DBS checks.

“Everyone will be undertaking a full safeguarding course in May,” founder William Howarth said. “No corners have been cut. We are fully insured, fire-marshalled and have CCTV. Everyone who uses our services signs a confidentiality agreement.”

William hopes the group can begin a relationship with a local prison, and influence others from a similar background as him.

He explained: “I want us to be the influence that we didn’t have when we were younger. I acted out but I received no help, and no-one asked questions why.”

Wayne Travis, one of the team’s volunteers, said: “The response has been next level. 112 appointments have been kept out of the 120 made, which we think shows just how much people in the borough need this help.

“We are all survivors ourselves. We are not vigilantes; we just want to do what is right and save other children from going through the same sh*t we did.”

As a result, the group has connections with other child sexual exploitation campaign groups, working alongside Survivors Matter, Voicing CSA, Shatterboys and the Truth Project.

PAG UK is following in similar footsteps with a powerful campaign: a photo of the survivor as a child alongside a recent photo as an adult.

Peer to peer sessions for male and female survivors of abuse and sexual assault are proving to be a well-utilised service, bringing people from across Lancashire.

A report on the sessions’ findings will be published in the future.

Wayne continued: “There has been a shortfall in mental health services. It can be up to a 16-week wait if you want to talk to someone and try to access help. We try to get service users in front of people in a number of days, because they often have nowhere else to go.

“Familiar faces drop in every day for a brew and a chat, and we are here for them to do that.”

Helpful information for those in need lines the windows of the centre: from where a hot meal can be had every day to useful phone numbers, it is clear that the centre is there to help anyone in need – for free.

Most days, a rack brimming with thick coats stands outside, free for anyone who needs one, whilst blankets, towels and toiletries can also be provided.

A craft and chat art session is being launched at the end of May, and a gardening project is in the works: both the most therapeutic activities for survivors, Rochdale Online is told.

Wayne said: “I’m glad people are talking about it and not keeping it in. It is good that we are helping people where other agencies can’t.”

William added: “Prevention is the biggest thing. We can never stop all child abuse, but we can try and prevent the majority of it.”

The walk-in centre is the latest in PAG UK’s unique way of helping those in need, following on from the group’s patrols around the borough – all in an attempt to prevent sexual attacks and grooming.

Shahid Razzaq, who was jailed last week, was caught by the Parents Against Grooming patrol team after approaching a group of underage girls in Broadfield Park and asking them for sex.

Earlier the same night, he had attempted to grab a 16-year-old girl after making lewd comments to her.

“We just happened to be there that night. That, to me, says it’s happening more than just that one time,” William said. “That park needs to be a no-go zone and needs lighting up because of the number of incidents that happen there.

“Our patrols are about surveillance. Unless there’s an immediate risk, we work from a distance. If we hadn’t caught Razzaq, in the time between the first assault and us taking him to the police station, he could have preyed on four or five other girls.”

When asked what he thought causes adults to prey on underage children, William answered: “It’s an incurable illness. The opportunity is there, and most survivors know their abuser or attacker.

“These days, 90% of grooming happens online. We know where to go to address this, but the problem is policing the apps which our children use.

“Predators don’t need to leave home anymore. When they coerce a child into sending nude photos, it is manipulation, like mind control. Children are very susceptible to what adults tell them because their brains aren’t fully formed.

“Children should not be charged with a crime that has happened under the influence of a groomer.”

Wayne added: “People are opening up; they are coming in for therapy, aftercare and prevention.”

“So far, our model is working, and we have been asked to set groups up elsewhere.

“Every other town needs one: we’re at where we need to be, but we still have a long way to go.”