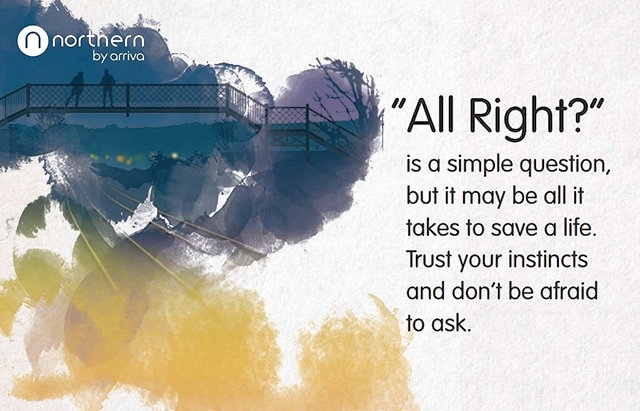 A simple gesture such as asking if someone is all right, could be all it takes to make them think twice about taking their own life

These tragic incidents not only affect the families of those involved, they can have a wider impact on the public as rail passengers, station staff and train crew are often witnesses.

Northern’s new campaign aims to raise awareness in the wider community that if you see someone who looks vulnerable or may be considering suicide, you can make a difference.

The campaign, developed with Juice Learning and based on a poem by West Yorkshire poet Simon Armitage, focuses on the message that any interaction, no matter how small, can save a life.

Northern commissioned Simon to write the poem, and it has now been turned into a poignant video narrated by TV and film star Mark Addy. Available on YouTube, the video shows how a simple gesture such as asking if someone is all right, could be all it takes to make them think twice about taking their own life.

Traditional British reserve means that many people feel unable to approach someone they don’t know, that by starting a conversation they could be considered to be meddling or prying; Northern’s new campaign encourages people to put those reservations to one side, that little discomfort could save a life.

Andrea Jacobs, Northern’s Safety, Health, Environment and Crime Director, said: “Northern’s network is vast and many of our stations are unstaffed or in remote locations – it’s impossible for us offer support at them all.

“My hope is that this campaign will empower our customers and the wider general public to take action, no matter how small, if they see someone they are worried may be considering harming themselves.

“It could be the difference between someone taking their own life, or not.

“This campaign is the start of Northern’s wider initiative to work with communities around our network, and provide them with the tools and support they need to help make a difference when people are potentially vulnerable at their local station.”

Video of the poem "All Right" by Simon Armitage, read by Mark Addy
©Northern Railway