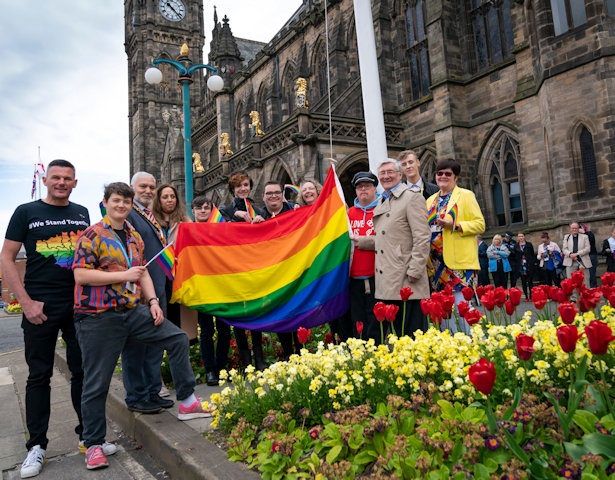 The borough of Rochdale’s new LGBT+ identity has been officially launched.

'Rochdale in Rainbows' was announced on the International Day against Homophobia, Biphobia, Intersexism and Transphobia (IDAHOBIT), which is celebrated on 17 May each year.

The day’s events included a launch party at Hopwood Hall College where young LGBT+ people from the borough’s colleges and schools shared ideas on events they would like to see take place throughout the year. Flag raisings also took place at Rochdale Town Hall and in Middleton.

The Rochdale LGBT+ steering group was established in November 2018 with the aim of coordinating existing activity and planning new events with LGBT+ people. The group is made up of organisations from across the borough including Greater Manchester Police (GMP), Rochdale Boroughwide Housing (RBH), Link4Life, The Proud Trust and the LGBT foundation.

In a short time, the group has already teamed up on events and are sharing resources to support each other on LGBT+ projects. The group is planning to hold a week of LGBT+ activity in November and is seeking the public’s input and support.

Zoe Keenan, student support tutor at Hopwood Hall College and steering group member, said: “Rochdale in Rainbows has really embraced the opinions of young people and now we would love to hear from everyone about their ideas for events and activities.

“This is the first time the borough has planned events like this, and we’d like to say a big thanks to the organisers of LGBT+ events across Greater Manchester for sharing their knowledge with us.”

The name Rochdale in Rainbows was submitted by The Proud Trust’s youth group and the wheatsheaf logo, a nod to the borough’s history, was submitted by resident Gary Fieldhouse. Both were chosen by the public via a social media vote.

Carl Austin-Behan, LGBT advisor to Greater Manchester mayor Andy Burnham and steering group member, said: “It has been brilliant to watch everyone bringing together their enthusiasm and expertise to provide new ways of celebrating the LGBT+ community, and to promote the great work already taking place.”

The Rochdale in Rainbows group is planning events and activities for November 2019 and would love the input of local residents.