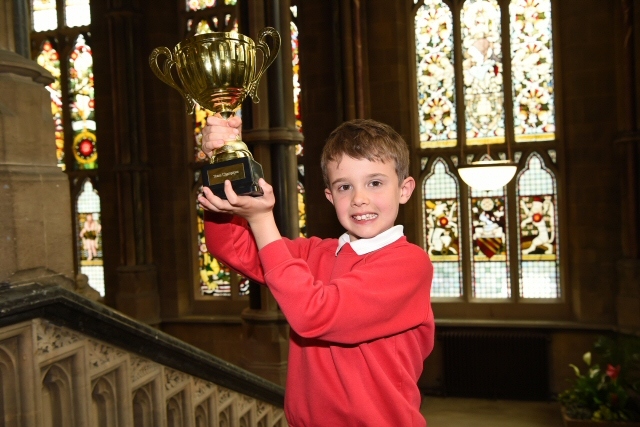 Set in the stunning Great Hall, over 200 supporters with flags and banners gathered to support the 15 finalists in the borough’s first ever spelling bee final. 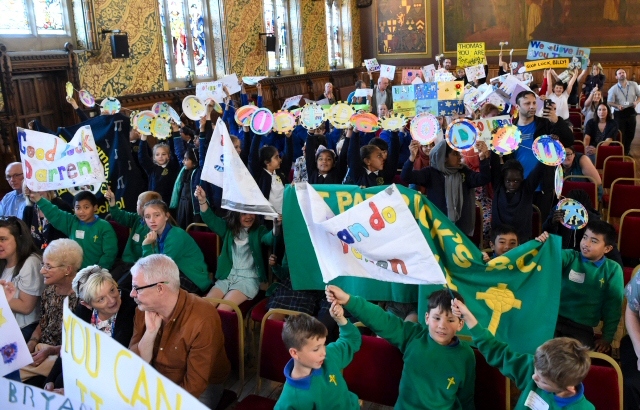 The event, sponsored by kind donations from Madeline Lindley and Wilmott Dixon, saw the finalists battle against each other in knock-out rounds; spelling words like; ‘impinge’, ‘hallucinations’, ‘squander’, ‘prosaic’ and ‘effervescent’.

As with the semi-finals, children were tested on age appropriate spelling patterns, National Curriculum words and Tier Two words.

To coincide with the arrival of Dippy the Diplodocus to Rochdale in February 2020, a practice dinosaur names round was also held.

Tension grew as the rounds went on, until Billy and Khadija Kiaanat, 11, from Sandbrook Primary School, competed in the final.

Billy clinched the inaugural title with a perfect spelling of ‘generation’ – sending the crowd wild.

Billy said in a speech: “I’m very happy I’ve won the Rochdale Spelling Bee. I’m very proud of myself that I got this far.”

Lowerplace Primary School have been instrumental in organising the borough’s first ever inter-school spelling bee, and 32 schools across the borough took part in the competition.

The Spelling Bee provided an opportunity for schools to work together so that children’s spelling can improve in a fun way.

Clare McGreevy, Rochdale Spelling Bee instigator and coordinator, said: “What a final! All our contestants were seriously impressive - to spell out loud under that pressure and in front of such a huge audience was a great achievement for all of them.

“Billy did so well; we are all delighted for him and I’m sure it will be a memory he will cherish."

Rochdale’s inter-school Spelling Bee is due to be back next year.