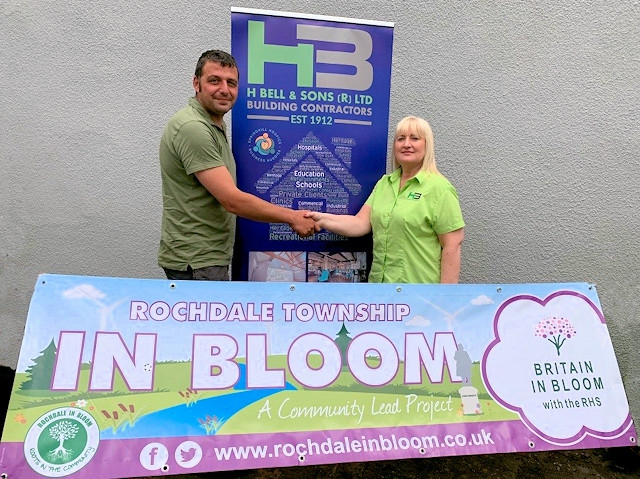 The company has committed to support the War Memorial pop-up move to its new home, ground works at Castleton War Memorial and an exciting new project sponsored by H Bell to commence at Green Mount Norden, plus renovating planters and assisting with the planting at the Rochdale AFC Wonder Wall.

Last year, Rochdale in Bloom scooped an outstanding number of awards at the 2018 RHS In Bloom contest, with a gold award for the third year in a row in the Large Town/Small City category at North West in Bloom, plus gold at the national Britain in Bloom.

Louise Scott, Accounts Manager at H Bell & Sons said: “We are delighted to be involved in this year’s Rochdale in Bloom providing sponsorship and support.

“As a longstanding Rochdale business, H Bell & Sons Ltd are always eager to support and be involved in the local community and are excited to see the new partnership grow.

“Lots of hard work and preparation is already ongoing. We hope this year Rochdale in Bloom can build on its previous success and reach gold again.

“The work carried out by all the volunteers and community groups in Rochdale to create spectacular floral displays is a credit to the town.”

Roy Down, chair of Rochdale in Bloom, said: ''Having H Bell & Sons on board is a real bonus for our In Bloom efforts this year.

“They are a local, family-run business, who already support so many worthy causes in Rochdale and surrounding areas. Their generosity in providing time and materials has made a massive difference to many of our projects."