Co-op to support Rochdale in Bloom in new sponsorship deal 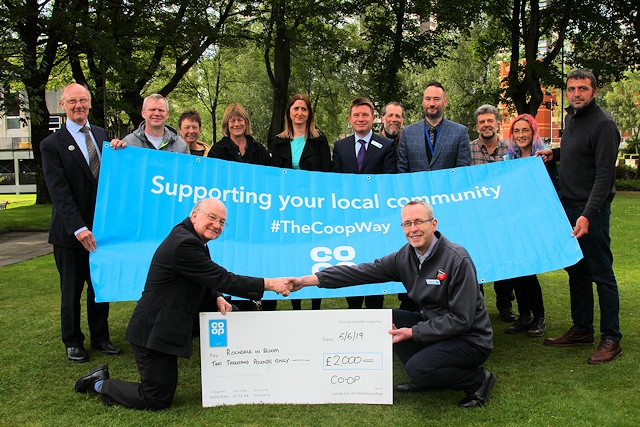 The Rochdale in Bloom committee is presented with a cheque from the Co-op; Carl England presents a cheque to Billy Sheerin

The Co-op has signed on as a major sponsor of Rochdale in Bloom for this year’s RHS North West in Bloom competition.

To kick-start the partnership, representatives from the Co-op presented the Rochdale in Bloom committee with a cheque for £2,000 on Thursday (6 June).

Alex Price, Area Manager for Co-op in Rochdale, said: “As a community retailer, we are delighted to be supporting Rochdale in Bloom, especially this year as we celebrate 175 years since the birth of the Co-op here in the town where it all began.

“The Co-op has a commitment to supporting local spaces and places such as those that will benefit from being brightened up by the many members that make Rochdale in Bloom such a great success.”

“This partnership will be fantastic for both of us as we have the support of one of our leading high street businesses whilst the Co-op will benefit from working with a grass roots community group which works with a real sense of co-operation."

Last year, Rochdale in Bloom scooped an outstanding number of awards at the 2018 RHS In Bloom contest, with a gold award for the third year in a row in the Large Town/Small City category at North West in Bloom, plus gold at the national Britain in Bloom.

The Co-operative group developed from a set of principles birthed in Rochdale by the famous Rochdale Pioneers, 28 local workers who began trading as a co-operative from Toad Lane in 1844.