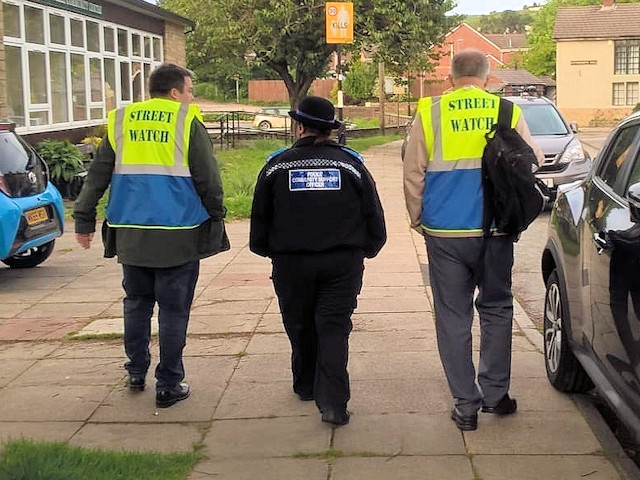 Street Watch is about local residents promoting good citizenship and supporting a better neighbourhood by patrolling their own streets. They provide visible reassurance and appropriately engage, in local issues that matter most to the community.

After working alongside local police, the Milnrow and Newhey Resident Street Watch group has launched.

The group has had 15 volunteers to date and currently has 10 active members who have had police checks and are able to monitor the area.

Each member has volunteered at least two hours per week with a minimum of two people to work together.

The group will be running with a maximum of 25 volunteers which means volunteers can be out and about at random twice each day for the majority of the month.

Group founder David Kendall said: “After the Beast from the East caused enormous problems for thousands of stranded drivers, our community pulled together to help anyone who needed help.

“Once it was all over and I reflected on what our community had achieved, I personally felt immensely proud of the local residents, schools and businesses.

“This community spirit was something I wanted to build upon. Our busy lifestyles have dictated for too long that we don’t have time for each other, avoiding eye contact with friends and neighbours because we are rushing to do the next thing on our never-ending lists, and probably running late as well.

“The community has shown we can and will make time if something is important enough. Whether the villages are your home or work does not matter, what matters is if we feel they are important enough to want to improve them as we can all make a difference.”

Mr Kendall continued: “We will be seen around Milnrow, Newhey and Firgrove as a visual presence. We will be talking to people about anything and everything, promoting crime prevention and interacting with people to gain feedback on how to reduce crime and antisocial behaviour.”

The group hopes to reassure the local community that people do look out for one another and act as a deterrent to would-be criminals.

Mr Kendall added: “The increased visibility of crime and antisocial behaviour via social media and the effects this has on our residents, especially some of the older generation, is why I have made the extra step of setting up the Street Watch scheme.

“We hope to reassure people that the community does care, we are looking out for each other and everyone can start to feel safer.

“We have no extra powers than anyone else walking down the street. We are not there to tackle crime; we are there to look out for everyone. We will help people in our community whilst acting as a visual deterrent. We want to bring people together and build trust between different social groups.

“If an area of concern becomes apparent to a Street Watch member we will do what we ask everyone to do, report it through the usual channels of 101, live chat or 999 for emergencies.”

Inspector Rob MacGregor, of Rochdale East, said: “Residents in the villages of Milnrow and Newhey have often asked what they can do to make a difference and Street Watch gives the community a great opportunity to do just that. We are fully in support of the initiative and will assist however we can.

“David Kendall and Gillian Lennon deserve huge credit for the hours they have invested in getting Street Watch up and running.

“From GMP's perspective this is a brilliant example of the Citizen's Contract in action. In an age when bonds in the community can be superficial this is an effort to build stronger and enduring ties which will have a positive impact on every aspect of the villages.”

Anyone who lives or works in Milnrow, Newhey or Firgrove and is over the age of 18 who would like to volunteer should email Milnrow and Newhey Resident Watch: