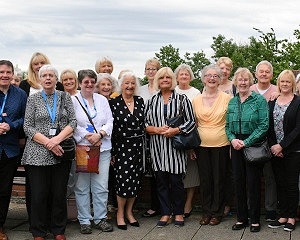 Tina Sheridan, 55, who has been volunteering on the Oasis Unit (dementia) at Rochdale Infirmary since January 2019 has been awarded a special Volunteer Star award.

The winners of the NCA’s first ever Volunteer Stars awards also include:

Special events were set up at the NCA’s Oldham, Bury & Rochdale and North Manchester Care Organisations to celebrate the enormous unpaid contribution volunteers make at hospitals and community services each year.

Over 500 volunteers were treated to a hot and cold buffet, and the winners of the awards were announced and celebrated by managers, fellow volunteers and staff alike.

The NCA decided to introduce the Volunteer Star awards this year to recognise the hard work and commitment of volunteers. Going forward, each month one volunteer from across the NCA will be chosen to win the award.

Nicky Goulding, volunteer support manager at the Northern Care Alliance NHS Group said: “I would like to congratulate each and every one of the award winners from the bottom of my heart. They all work tirelessly and the difference they make is fantastic. I hope that by introducing these awards we go some way towards giving our volunteers the recognition they deserve for all the tremendous hard work they put in.”

The NCA brings together the Salford Royal and Pennine Acute Hospitals trusts, operates five hospitals and community services, and employs over 17,000 staff.

Volunteers' Week is a chance to celebrate and say thank you for the fantastic contribution millions of volunteers make across the UK.

It takes place 1-7 June every year and is an opportunity to celebrate volunteering in all its diversity.