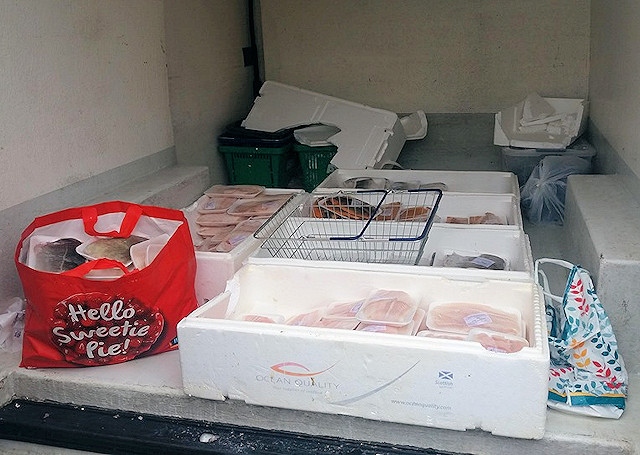 Officers from Greater Manchester Police had an unusual catch of the day on Tuesday (11 June) after a suspicious van was reported in Castleton.

Over the past couple of days, Castleton neighbourhood team have been investigating a suspicious van reported by local residents.

Traders had reportedly been targeting elderly people, pressuring them into paying hundreds of pounds of large quantities of unwanted and unrefrigerated fish from the back of the van.

PC Michelle Farmer had been proactively searching for the van when she came across it on Hillcrest Road.

A quick check on the police databases showed that – despite the claims from the owners – the van was not insured. It was promptly seized and taken away.

The men selling the fish door-to-door were spoken with and decided that they didn’t want to carry the remaining fish with them on their long journey back to the north east.

A representative of GMP Rochdale said: “This is a great example of a proactive neighbourhood team quickly servicing the needs and concerns of the area they cover.

“This is something which has been reported across all areas of the country in the past few years.

“These traders often try to convince people to buy just a few pieces of fish, but then present them with freezer-filling quantities, or use a card machine to charge people's cards for large amounts.

“Our advice is never to deal with cold-callers on your doorstep, whatever they happen to be selling.

“Never be embarrassed to say “no” to any doorstep cold-callers: you have the right to tell unwanted callers to go away.

“Contact a local relative, neighbour or friend if you think someone is a rogue trader or call 101 or contact your local Trading Standards team.”