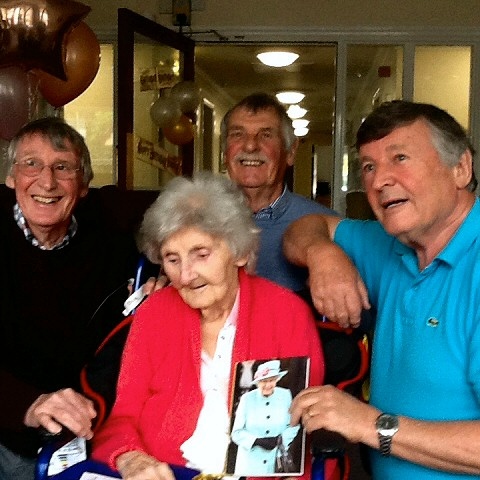 Catherine (Ena) with her three sons: Paul (left), eldest Peter (back) and the youngest Jeff (right) and her 100th birthday card from the Queen

Ena was born in the Queen’s Head Hotel located at 54 Yorkshire Street, Rochdale on 8 June 1919; a local manor brewery with living accommodation that her grandparents owned. Now home to M&S in Rochdale town centre, the hotel closed in 1932, by which time Ena had moved to Bamford with her parents.

During her early life, she was an air-raid warden at Norden Woodyard, now recognised as Woodyard Service Station, where she drove a 10-ton truck during the Blackout.

In 1942, Ena married Jeffrey Diggle with who she had three sons: Peter, Paul and Jeff. Her youngest son, Jeff, said: “Our father was a non-Catholic, so I can imagine their courtship was very difficult at the time.”

Her husband, Jeff, was a Lieutenant with the Royal Electrical and Mechanical Engineers (REME) and was left behind at Dunkirk 75 years ago, declared missing, but made a safe return home and was promoted to Major. After this, Ena and her husband lived at Hartley Street, Cutgate until 1953.

Later, they bought and ran the Post Office at Nixon Street, Castleton until 1968.

Ena lived in Rochdale for 94 years, her most recent home being at Ashley Close, off Manchester Road, up until six years ago when she moved to Sandbach to be closer to family. Ena currently resides at a nursing home in Haslington, near Crewe.

Due to the tie in with the 75th anniversary of D-Day being in the same week, which Ena’s husband was involved with, Ena had a special mention on BBC Radio 2’s Jeremy Vine Show on Wednesday (5 June). The week was even more special as one of her grandsons was singing at the D-Day memorial service in Bayeux.

Ena’s son Jeff added: “Jeremy spoke of the connection between them and said that Major Diggle's widow [Ena] would be 100 in the same week as D-Day.”

Ena also received the traditional message from Her Majesty, The Queen, to celebrate the milestone.