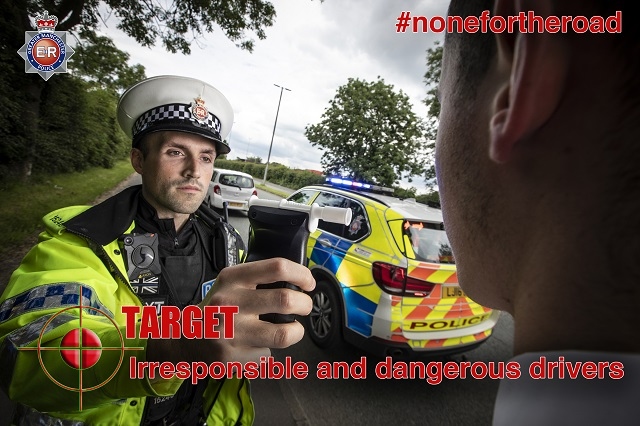 Don’t risk it, stay safe and have none while driving on the road

Greater Manchester Police (GMP) is taking part in a national campaign to tackle drink and drug drivers during the busy summer period. Anyone charged with drink or drug driving offences during the campaign will be named by GMP.

The campaign is led by the National Police Chiefs Council (NPCC) and runs from Monday 24 June until Monday 8 July with the aim of reducing the number of deaths and injuries caused by irresponsible drink and drug drivers.

Targeting irresponsible and dangerous drivers in a bid to drive down fatal and serious road traffic collisions is one of the main objectives and a priority for the road policing unit leading on this.

Protecting other road users from the harm caused by those who drink and drug drive is a critical part of an officer’s role at GMP.

Chief Inspector Harrison White said: “We do not tolerate anyone who is under the influence of drink or drugs while driving. They are not only a danger to themselves but, more importantly, to other innocent drivers or pedestrians using the road.

“The warmer weather and lighter nights can tempt people to stay out longer and have a drink but this is exactly the type of scenario that can lead to drink driving. If you do drink, please arrange alternative transport home to ensure you don’t affect anyone else’s night.

“Any amount of drink and drugs can impair your vision and dramatically reduce your reaction times. It only takes a second to lose control of your car but the consequences can last a lifetime.

"Don’t risk it, stay safe and have none while driving on the road.

“If you suspect anyone is driving under the influence of drink or drugs, contact the police directly on 101 or 999 in an emergency where they pose an immediate threat to themselves or other road users. Alternatively call Crimestoppers anonymously on 0800 555 111.”