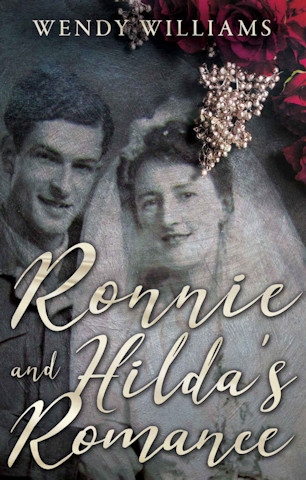 A book documenting a Rochdale couple’s enduring love in the aftermath of World War Two has been written by their daughter.

Ronnie and Hilda Williams met by chance aged 21, in Lancashire in November 1945, when Ronnie was home on his first leave after fighting in some of the most bitter campaigns of the war in Italy.

Their romance, documented in over 250 original letters, forms the narrative of this intriguing story, ‘Ronnie and Hilda’s Romance (Towards a new Life after World War II)’ which has been put together by their daughter, Wendy Williams, a translator and reviser originally from Rochdale.

Most of the letters which form the basis of the book were sent to and received from the author’s grandparents’ shop on Halifax Road in Smallbridge, which they ran between 1936 and 1960.

Wendy, who now lives in Nottingham, said: "My mother, Hilda Cartwright at the time, was a newly qualified teacher, living with her parents, Wilfred and Edith Cartwright, at their grocer's and off-licence at 418 Halifax Road.

"Almost all of the letters are written to and from that address, and my mother's letters in particular give a wealth of information about the local area from Rochdale to Littleborough."

With the uncertainty of the future, and Ronnie’s obligation to return to active duty as a soldier abroad, Hilda and Ronnie took the ultimate leap of faith and became engaged after knowing each other for only ten days. Until Ronnie was demobbed in May 1947, the letters they exchanged were their principal means of getting to know each other.

Their eloquent letters, which are in turn happy, sad, humorous, serious and informative, provide a fascinating and vivid glimpse of what life was like in the immediate post-war period, both for Ronnie, still suffering hardship in active service, and for Hilda, in a Britain struggling to return to normality.

Wendy added: "Although mum started working in Middleton, by 1957 she was teaching at St John's Junior School, firstly on Halifax Road, then on Wardle Road when the school moved.

"She continued to work there until 1984 when she retired, and my parents moved to be with me and my young son. I am sure that many people will still remember having been taught by her."

‘Ronnie and Hilda’s Romance’ is a social and military history, a romance, and, above all, it is about the hope for a new and better life after the long-awaited end of World War Two.

‘Ronnie and Hilda’s Romance’ is already available in ebook format, and will be published in paperback 28 June 2019.