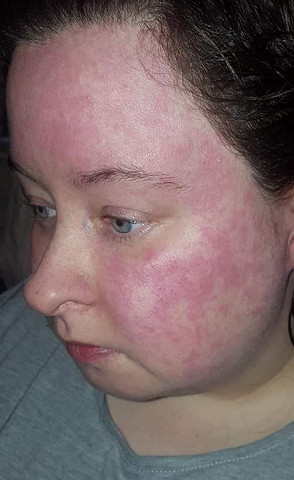 Mast Cell Activation Syndrome sufferer Stacey Parker must raise £100,000 for an operation on her neck to stabilise her cervical spine, she has been told after visiting a specialist surgeon in Spain.

Stacey, 31, of Castleton, underwent a digital motion x-ray in Barcelona on Friday (21 June), to help assess any issues or damage to her spine in greater detail.

However, in a devasting blow, Stacey discovered that, in addition to misaligned and dislocating vertebrae, she also has spinal instability in all but one vertebra in her neck, rotation and curvature of the spine, left-sided weakness and possible jugular compression.

As a result, she must undergo neurosurgery to fuse her neck, losing all of her movement in her cervical spine.

The fusion surgery is not available on the NHS, meaning Stacey will have to raise the costs of approximately £100,000 herself.

Her mum, Bernadette Parker, said: “There is nothing we can do to stop the spinal issues or to prevent further deterioration. Stacey’s symptoms will only get worse as time goes on and therefore, although we did not want to go down this route, surgery is now her only option to survive and get her life back.

“Stacey not only needs to survive but needs her quality of life back and this is the only way it will happen; there aren’t any options and we may also be running out of time.

“We also want to be able to enjoy happy times as a family whilst we are able to, whether that be as simple as enjoying warmer weather, going to the park and going for picnics.

“At the moment, Stacey struggles with any length of activity as it leaves her exhausted and in agony. The sooner she has the surgery the better, less complications and her survival rate will be better.

“We need your help more than ever.”

You can read more about Stacey’s battle to overcome her illnesses here:

She was diagnosed with Mast Cell Activation Syndrome (MCAS), where sufferers’ immune systems become hypersensitive and they react to all sort of normal things, often with a very limited diet and they become housebound as they are sensitive to environmental triggers.

Stacey’s health became uncontrollable with symptoms affecting every system within her body, leading to her take 30 tablets a day for her conditions.

In addition to Mast Cell Activation Syndrome, Stacey has also been diagnosed with other conditions, including lipoedema, lymphoedema, Postural Orthostatic Tachycardia Syndrome (PoTS), plus spinal issues.

She is also at risk of adrenal crisis as her adrenal glands aren't working, potentially due to taking the steroid prednisolone on a long-term basis.

In May 2019, Stacey underwent genetic testing for Ehlers-Danlos Syndrome (EDS), a condition which causes extreme widespread pain, daily dislocations, cardiac abnormalities and multiple other illnesses through weak and faulty connective tissue holding the body together.

EDS affects around one in 5,000 people worldwide.

Stacey’s results are expected back within eight to 12 weeks after testing before she will return to London.

To donate to Stacey’s cause, please visit: