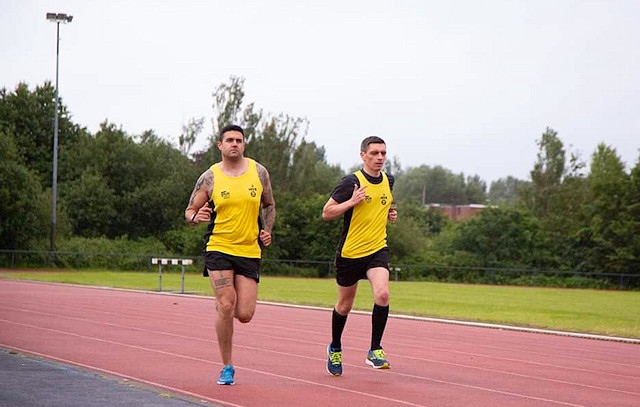 A running club in memory of the 22 Manchester bombing victims has been established by two Rochdale men, including the policeman turned firefighter, Aaron Parmar, who ran 22 races in their memory.

Aaron was a police officer at Manchester Arena on the night of the horrific terrorist attack in 2017, witnessing the physical and emotional devastation caused.

After moving to the fire service, Aaron decided to show his support for the 22 victims by running 22 10k races in their honour, engraving each medal with their names and giving them to the families.

After his last 10k, Aaron decided he wanted the good work to continue, so set up an online running club with friend Kevin Holland in memory of the 22 victims.

Kevin, who lives near Aaron and completed several of the 10k runs with him, said: “The club was announced to the families at the Manchester 10k [in May], and they all loved the idea.

“We’ve created this group to get people running and inspire people to stay active.”

The club, sponsored by Run North West, is not affiliated with UK Athletics, but Kevin says this may change in the future.

Currently, the club meet at races and have sold around 100 kits through Just A Little Bit running clothing.

£2 from the sale of each yellow and black piece of kit, designed by Aaron, will be donated to trusts and charities set up by victims’ families every year on the anniversary of the attack: Liv's Trust CIO, Chloe & Liam Together Forever Trust, The Remembering Nell Foundation, Eilidh’s Trust, The Megan Hurley Foundation, and 22MCR.

Hive 22 is also in the process of setting up a virtual race to cover 22 miles (no time limit), with an embossed medal created by the makers of the London Marathon medals.

The race will cost £14 to enter, with all profit after medals and certificates will go to charity.

Earlier this month, Aaron received a special award from the Mayor of Rochdale, Councillor Billy Sheerin, for his charity efforts: