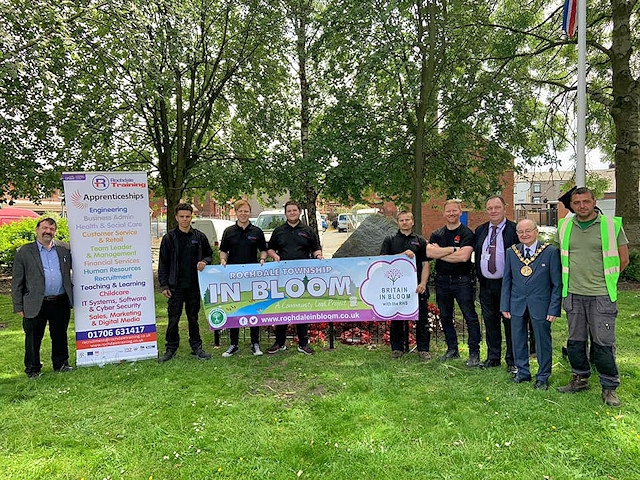 Rochdale Training have installed a bespoke poppy fence around the Castleton War Memorial. Pictured with Mayor Billy Sheerin, and Paul Ellison of Rochdale in Bloom

Apprentices of Rochdale in Bloom's sponsor Rochdale Training have installed a bespoke poppy fence around the Castleton War Memorial.

Before June 2018, the village did not have any memorial, but with the centenary of the end of the Great War this year, Mayor of Rochdale Councillor Billy Sheerin and the Rochdale In Bloom team endeavoured to put this right.

The memorial stone was placed on the centre of the village green by volunteers, led by Rochdale in Bloom’s Paul Ellison, replacing a large tree which was uprooted during the ‘Beast from the East’ storm that year.

Mayor Billy Sheerin said: “The lads working at the Rochdale Training Association have done the village of Castleton proud. Using their skills and talents, they have produced a unique commemorative fence around the village memorial stone.

“The quality and workmanship is of the highest standard and will last for many years. Speaking on behalf of the residents of Castleton, we want the lads to accept our gratitude and heartfelt thanks and extend this to all involved in making our memorial stone even more special.”

Paul Brierley of Rochdale Training said: "It's fantastic to see our apprentices creating and installing a lovely fence for the Rochdale In Bloom Castleton War Memorial project. We are delighted to be supporting the In Bloom group in such a thoughtful project."

Chairman of Rochdale in Bloom, Roy Down, commented: “It is wonderful to have the continuing support of Rochdale Training for our In Bloom efforts.

“This great community project has given back to the apprentices by allowing them to benefit by utilising their learned skills. This makes the fence particularly special for Rochdale in Bloom, as they have done a fantastic job on this thoughtful project.

“Throughout our other In Bloom projects we have people of all ages contributing, and it’s heart-warming to see apprentices helping out on such a meaningful project.”

Rochdale in Bloom is gearing up for another gold award after scooping an outstanding number of awards last year, with a gold award for the third year in a row in the Large Town/Small City category at North West in Bloom, plus gold at the national Britain in Bloom.