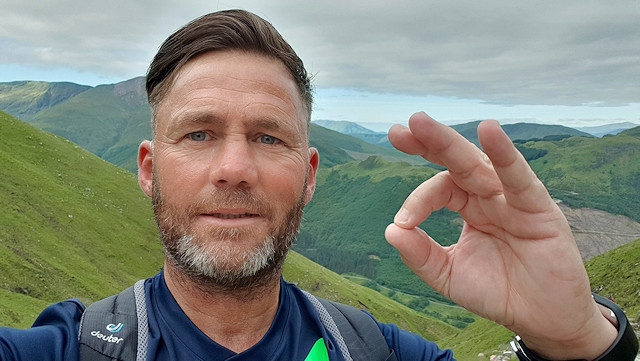 A Rochdale man is halfway through climbing Ben Nevis seven times in seven days to raise money for the Stephen Gartland Foundation.

Keith Hook is taking on what he has called the ‘Ben Neverest Challenge’ in July, the equivalent of climbing higher than Mount Everest (29,029 ft) for the charity, also known as the SG6 foundation.

The SG6 Foundation charity was launched in memory of aeronautical engineer, Stephen Gartland (aka ‘Garty’), who took his own life in August 2016, aged just 45, after suffering with depression.

The foundation helps to support adults and children with mental health issues whilst providing help with sporting equipment and opportunities.

Mr Hook said: “Mental health amongst men is an ever-growing concern and raising awareness that it is "ok to talk" is a message I boldly state and so does The Stephen Gartland Foundation. Like Stephen, I have also struggled with depression and anxiety.

“Having climbed Ben Nevis last year in my own quest for a fulfilling meaning whilst trying to reach recovery, I thought what better way than to raise money for local good causes than to return, but this time with a very courageous challenge.

Mr Hook started his challenge on Saturday 6 July, which will see him climb 30,891ft, almost 2,000ft higher than the world’s tallest mountain.

He continued: “Mental health [problems] unfortunately is an illness that many people do not understand unless they have suffered it themselves. For many, it causes frustration with stereotypical comments like ‘man up’ or ‘are you not better yet’.

“I think if you ask anybody who suffers, they would like nothing more than to lead a normal life and sadly, for most, that may never happen. Learning to come to terms with the possibility life will never be the same again, and learning to manage your illness, is a challenge most never get to grips with.

“From my own experience anybody who has committed suicide, has done this because they see no way out. Hopefully with more education, exposure and acceptance, we can turn the tide and get people the support they need.

“The Stephen Gartland Foundation is spearheading this initiative locally and that is why I would like you to dig deep and support me on this challenge.