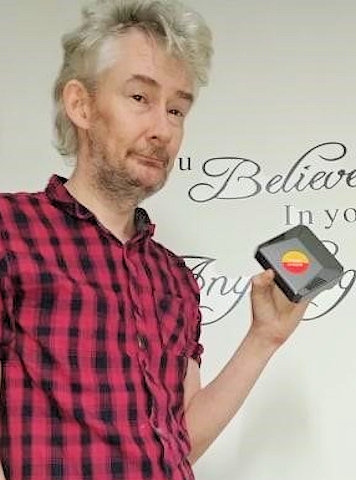 Gary Rigg with his invention, the Wifi NotSpot

A Rochdale dad tired of 'battling the Internet' to keep adult content away from his children’s eyes has taken matters into his own hands - by inventing his own safeguarding device.

Gary Rigg, from Shawclough, has broken through into never-seen-before territory with his invention, the “Wifi NotSpot” and has already got the attention of businesses looking to implement it for their customers.

The “NotSpot” allows parents to manipulate apps such as WhatsApp, Facebook, SnapChat and Instagram, turning them off at certain times of day, or limiting access 24/7. Aside from social media, the device can block advertisements, gambling sites, pornography, mobile app stores and online gaming services, all at the discrestion of the parent.

Unlike existing devices, the ‘not-spot’ blocks web sites and mobile applications for all connected devices. It creates a new WiFi hotspot in your house - the so called ‘not spot’. Parents can then partition their Internet by only giving the kids access to the Not-Spot while their existing WiFi hotspot remains “parents only”.

Gary, said: “Most parents I’ve spoken to have issues when it comes to their children's internet access, it’s the biggest challenge of the age we are in. Everyone has a phone, yet in reality not that much is being done to prevent underage kids accessing adult content.

He added: “This idea came along during a conversation with a friend who had recently become a dad, and was rightly full of concern, having witnessed the ‘smartphone generation’ struggle with the internet in their hands.

“No one could have predicted the impact, particularly that of social media. There has been a massive spike in mental health admissions since 2011, coinciding with us, as parents, handing out the technology like candy.

“The main thing is that it blocks content long before it gets anywhere near the device. So long as devices only access the Internet via the not-spot, there is no way to bypass the blocking. Given we now recognise gaming addiction as a mental health condition, I think the scheduler will be the most useful feature to parents concerned about ‘all nighter’ gaming online.

“I’m also really pleased with its small size and tough aluminum case, it makes it ideal to take with you when you’re travelling. I’ve even run the device for several days using a small power bank battery.”

“All that remains now is production.

“1,000 units are planned for September/October this year. It’s a big risk and a big investment which I’m hoping to ‘de-risk’ somewhat by our KickStarter campaign that is running this month.”

Gary’s idea has been approved for a Kickstarter Campaign and has already attracted backing.