Police cut free from car after collision with uninsured driver 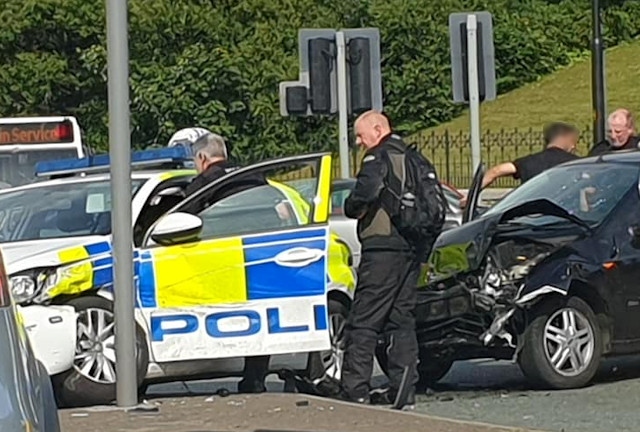 The collision at the junction of The Esplanade, Manchester Road, St Mary's Gate, Dane Street

Two police officers were taken to hospital after they were cut free from a police car after a collision with an uninsured black Ford Focus near Rochdale police station on Wednesday afternoon (10 July).

Two fire engines from Rochdale attended the incident at the junction of Manchester Road, Dane Street, St Mary’s Gate and the Esplanade, using specialist cutting equipment to help free a policewoman who was trapped.

She was supported by a Fire Service Trauma Technician before being treated by paramedics.

Two officers were taken to hospital to be treated for injuries consistent with whiplash.

The driver of the Ford Focus – a 26-year-old man – was arrested at the scene on suspicion of driving under the influence of drugs, driving without due care and attention, and driving without insurance. He remains in custody for questioning.

Information can also be passed on anonymously, via the independent charity Crimestoppers, anonymously, on 0800 555 111.