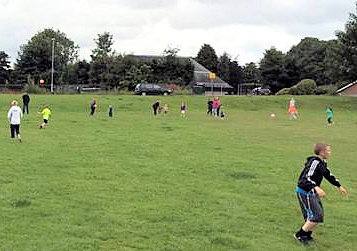 Heritage Green, at the junction of Caldershaw Road and Cut Lane in Norden, had the village green officially recognised following a three-and-a-half year fight

The chairman of the Open Spaces Society has claimed green spaces across the UK are “under unprecedented threat as the law on town and village greens is in the balance.”

Speaking at the society’s AGM on 11 July, Chairman Chris Beney spoke of how a space in Wiltshire could not be registered as a green, because it was “vaguely identified” in a local plan as eligible for potential development, and two cases being heard at the supreme court after lengthy battles to register spaces in Lancaster and Surrey as village greens.

Chris said: “There are communities up and down the country who will now not be able to register their treasured open spaces as greens. This means that they are neither securing their rights of recreation there nor protecting the land from development.

“If those seeking to register their greens lose these cases, it will be another bitter blow for town and village greens, potentially putting at risk any land which is held by a public body.

“We shall keep a close watch on these cases and trust that the courts will uphold the rights of local people to enjoy the land they love.”

These cases are not dissimilar to the story of registering Heritage Green in Norden as a village green.

Heritage Green, the field at the junction of Caldershaw Road and Cut Lane, Norden, was approved as a village green, after the application was unanimously approved in October 2018 – following a three-and-a-half year fight to be recognised as such.

The land was bought by Rochdale Council in the 1950s via a compulsory purchase order which allowed for housing and recreational uses.

But no evidence was unearthed to suggest that the site was intended for housing and a site inspection showed that the condition of the land would have made it difficult to develop in 1957 and remains so today.

Friends of Heritage Green declared their victory a ‘triumph for democracy’ after Rochdale Council confirmed that the land would be entered into the register of town and village greens after the group proved that the field had been used by local people for lawful sports and pastimes ‘as of right’ for at least 20 years.