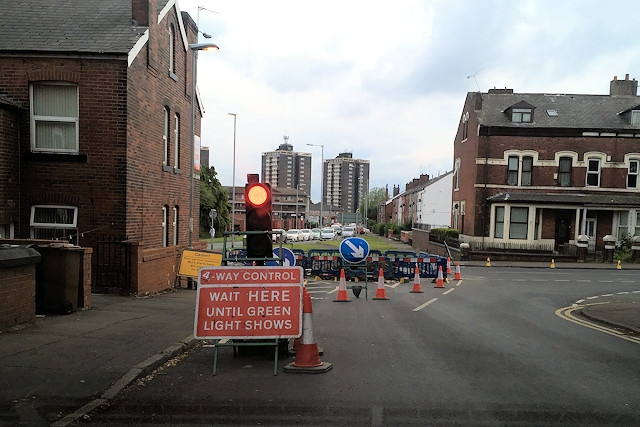 Roadworks near Falinge Park are expected to last around four weeks whilst a gas main is upgraded.

Four-way traffic controls have been introduced on the mini-roundabout outside the park as of 8 July due to works by Cadent Gas to replace a gas main before the road is resurfaced by the council.

From Monday (15 July), the works will move up Falinge Road, away from the Sheriff Street junction, switching from four-way traffic lights to two.

A spokesman for Cadent, which manages the north west’s gas mains, said: “We have started work to replace an underground metallic gas pipe. This is a very old pipe and has reached the end of its working life, and we’re upgrading it so that homes in the local area can continue to enjoy safe and reliable gas supplies, well into the future.

“The pipe will last at least 80 years. More than 85% of homes in Rochdale rely on gas to fuel central heating – it’s an essential part of our lives.

“Unfortunately, as our pipes are generally underneath public roads, this means there is inevitably some disruption when we need to maintain or upgrade them. In this case, we’ve worked with the local authority to agree timing and traffic management around our work area.

“It’s also been programmed in now so that the council can follow in immediately after to resurface this stretch of road – two necessary jobs being done, back-to-back.

“We appreciate everyone’s patience as we get this work done.”

Cadent’s work to replace the gas main on Falinge Road comes as part of a 30-year programme to upgrade the older gas mains across the UK.

Every year in the north west, Cadent invests more than £70m upgrading around 500km of its older mains.