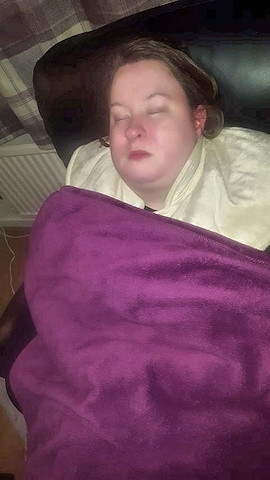 Stacey Parker and her family have made the difficult decision to stop fundraising for an “unachievable” £100,000 operation to stabilise Stacey’s neck.

Castleton resident Stacey, 31, who suffers from Mast Cell Activation Syndrome, was told last month that she needs this vital surgery after a digital motion x-ray showed spinal instability in all but one vertebra in her neck, misaligned and dislocating vertebrae, rotation and curvature of the spine, left-sided weakness and possible jugular compression.

The operation required is similar to that undergone by Samantha Smith, of Smithy Bridge, who underwent several fusion operations in 2018 and 2019 to prevent further deterioration linked to Ehlers Danlos Syndrome (EDS).

Ehlers-Danlos Syndrome (EDS), which affects around one in 5,000 people worldwide, causes extreme widespread pain, daily dislocations, cardiac abnormalities and multiple other illnesses through weak and faulty connective tissue holding the body together.

Similar to Samantha, Stacey also has Atlantoaxial instability, excessive movement between the first and second cervical vertebrae, and Craniocervical Instability, where the ligaments in the neck are too stretched and weakened to support your head.

Both conditions can arise in EDS sufferers due to a lack of connective tissue support at the craniocervical junction (between the skull and first two vertebrae of the spine).

Stacey has undergone genetic testing for EDS and is currently awaiting the outcome of results.

However, Stacey and her family have decided to halt raising £100,000 as they feel it is too difficult to achieve at the moment with both Stacey and her father, Tony, being ill, instead hoping to raise just £5,000 to help with costs of upcoming medical appointments.

Tony, who is due to begin radiotherapy, has aggressive and advanced prostate cancer which has spread to his bones. He has a prognosis of just five years.

Stacey’s mother, Bernadette said: “We just feel it is unachievable at this time and it is too difficult for us as a family to achieve. This isn’t us giving up; myself, Stacey’s dad and the rest of our family want to see Stacey get better, to have the life she deserves and which she grieves for.

“We just haven’t got £100,000 for her to have it without crippling us all financially and leaving two poorly people in an even worse scenario yet achieving this target by crowd funding and fundraising is unachievable.”

Bernadette continued: “Stacey is just existing at the moment; she doesn’t have a life as such. She is unable to go out alone and needs support with a variety of things due to extreme fatigue, pain and dreadful symptoms she suffers with like itchiness, rashes, migraines, nausea, vomiting, confusion, just to name a few.

“Her life isn’t like her peers’. Stacey has recently said she needs to visit a euthanasia clinic as she is fed up of her life, her pain and her suffering as it is never ending.

“As a parent, this is awful to hear, it’s awful to see her in so much pain, discomfort and suffering whilst not being able to help.”

Stacey first fell ill with a range of strange symptoms in early 2016, following episodes of allergic reactions which caused rashes, intense itching and swelling. Her health became uncontrollable with symptoms affecting every system within her body, leading to her taking 30 tablets a day for her conditions.

She was diagnosed with Mast Cell Activation Syndrome (MCAS), where sufferers’ immune systems become hypersensitive and they react to all sort of normal things, often with a very limited diet and they become housebound as they are sensitive to environmental triggers.

In addition to Mast Cell Activation Syndrome, Stacey has also been diagnosed with other conditions, including lipoedema, lymphoedema, Postural Orthostatic Tachycardia Syndrome (an abnormal increase in heart rate after sitting or standing) pre-syncope (light-headedness and near fainting), urticaria (hives), plus spinal issues.

Unfortunately, Stacey cannot wear a hard or soft collar to support her cervical spine due to the anatomy of her neck and because she has no muscle support in this area. As a result, these types of collars could cause further issues.

Stacey has been advised she can wear a self-inflating collar from time to time for a little relief.

You can read more about Stacey’s battle to overcome her illnesses here:

Before Stacey became unwell, she was employed by Rochdale Borough Council, had her own home and was enjoying life. Unfortunately, since becoming severely unwell, she has had to sell her home and move back in with her parents.

Just over a year ago, Stacey medically retired from her job as she was no longer well enough to work. Her symptoms will only get worse as time goes on, rendering the surgery a necessity.

Stacey and her family have been fundraising since 31 December 2018, for diagnostic testing which could not be done on the NHS.

Since then, an impressive £11,000 was raised which enabled Stacey to have the tests needed.

However, the family are still awaiting the genetic test results for Ehlers Danlos Syndrome and autoinflammatory diseases.

Stacey and her parents’ lives have been consumed with medical appointments to try and get her well again. Her mother left her role in the NHS and began working for herself so that she could be flexible and help meet Stacey’s needs better.

Stacey now documents her journey through illness on social media as ‘Help for Stacey – a fight for survival & quality of life’.

Bernadette added: “We do need help to raise £5,000 to help with all associated costs such as travel, accommodation, perhaps even potential treatment, when travelling to London for upcoming medical appointments.

“We know it is unlikely she will get the surgery on the NHS as all those before her have had to go abroad, but we have to try. We have various appointments coming up on the NHS, so we are going to try and explore every possible angle.

“Thank you to everyone for their help, support and donations to date. It means a lot and has helped so much.”

The Parkers will continue crowdfunding for £5,000 and if any funds are unused, they will be donated to Mast Cell Action.

To donate to Stacey’s cause, please visit: