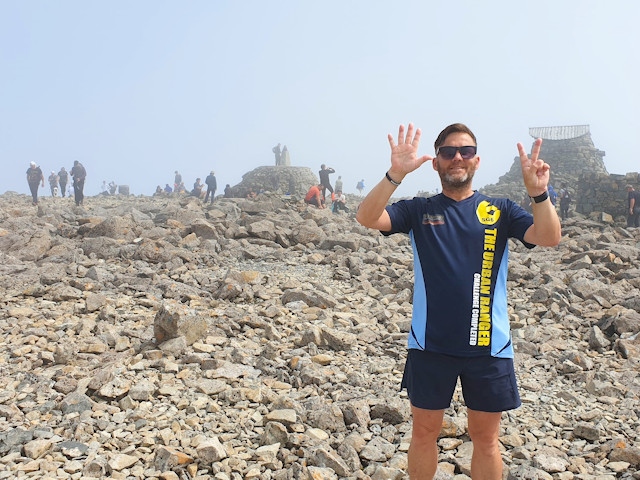 Keith Hook at the top of Ben Nevis

A Rochdale man has climbed Ben Nevis seven times in seven days to raise over £3,000 for the Stephen Gartland Foundation.

Keith Hook has completed what he has called the ‘Ben Neverest Challenge, the equivalent of climbing higher than Mount Everest (29,029 ft) for the charity, also known as the SG6 foundation.

The SG6 Foundation charity was launched in memory of aeronautical engineer, Stephen Gartland (aka ‘Garty’), who took his own life in August 2016, aged just 45, after suffering with depression.

The foundation helps to support adults and children with mental health issues whilst providing help with sporting equipment and opportunities.

Mr Hook started his challenge on Saturday 6 July, seeing him climb 30,891ft, almost 2,000ft higher than the world’s tallest mountain over the course of a week.

The final ascent was completed in four hours and 33 minutes.

Mr Hook, who has suffered with depression and anxiety, said: “Thank you guys for all the messages of support and donations over the last seven days and especially the last 24 hours. You guys have been phenomenal and again I am humbled.

“A big thank you to Curtis Patrick, Paul Farrell, Matthew Knowles, Eleanor Galvin, Emma Radcliff for travelling hundreds of miles to support me at various stages throughout this last seven days. Be proud of yourselves because I am.

“I am so pleased with the way you have given support and donations to help me break the £3,000 barrier. That money will be going back into the community helping so many different causes.”

He continued: “I was offered a bonus £100 donation if I finished before 3pm on the last day. At 2pm, we were just above the halfway point on our way back down.

“I ran the last half of the mountain to make sure I could beat the 3pm deadline. I got down at 2.33pm and the offer was obligated by Mr Richard Fabien, who has now donated £200 alone. A true gent. The funny thing is Curtis and Faz walked back and still finished at 2.58pm so I ran for nothing, because I still would have beat the deadline.

“What an amazing seven days this has been, and for what it was meant to stand for. The support has been humbling and I will never forget how everybody supported me when I was nearly broken.”

The donations page will stay open until the end of July.