Garden planted at Peterloo meeting point to commemorate the massacre 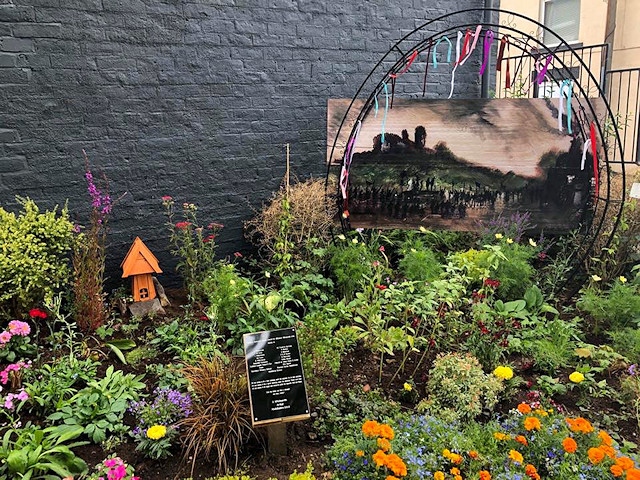 A community garden commemorating those who died in the Peterloo Massacre of 1819 was unveiled in Middleton on Sunday 14 July.

The memorial garden is located on the corner of Bardsley Street and Morton Street, where Middleton residents met before marching to the rally at St Peter’s Field in central Manchester on 16 August 1819.

Led by Samuel Bamford, 60,000 workers and reformers from north west towns and villages including Heywood, Rochdale and Middleton, travelled to hear political speeches, but the day became known as the Peterloo Massacre after 18 protestors were killed and nearly 700 injured after soldiers and special constables attacked the public protest calling for democratic representation.

Within days the slaughter was named ‘Peter-loo’, an ironic reference to the battleground of Waterloo.

The garden has been created with local school children and has been partly funded by Middleton Rotary along with many local businesses and residents.

Paula Hickey and Martin Cove, who are behind the installation at Historic Cheapside, said: “We would love to say thank you for the huge community support at the unveiling of the Peterloo Memorial Garden.

“This year marks the 200th anniversary and as tribute the neglected and rather sad bed on the corner of Morton Street and Bardsley Street has been transformed with planting and a painting by local artist, Steve Whitworth.

“We would like to thank everyone who contributed time, plants and financial help to make this possible.”

Unveiling of the Peterloo Memorial in Middleton