Highest rainfall in country recorded in Rochdale borough this weekend 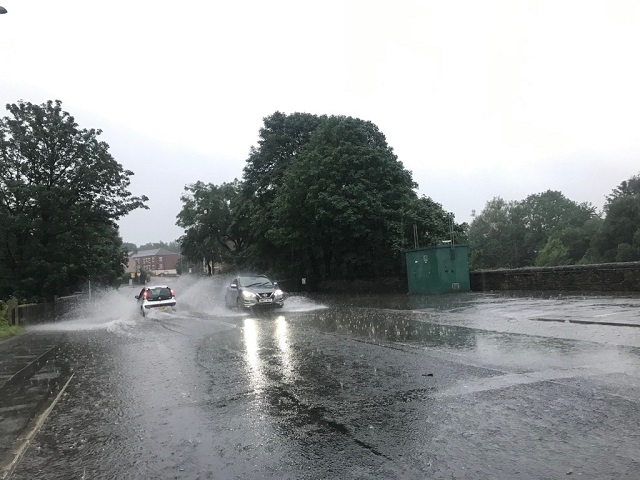 More than a month’s rain fell in just 48 hours

The highest level of weekend rainfall in the country was recorded in the Rochdale borough, as more than a month’s rain fell in just 48 hours.

The Met Office has confirmed 111.6mm of rain fell in the borough over Saturday 27 and Sunday 28 July, well above the monthly average for July of 83mm for Lancashire.

Keele in Staffordshire experienced the second highest level of rainfall in the country, with 64.4mm falling over the weekend – almost half that recorded locally.

The wet weather came just days after record-breaking temperatures of 32.7 °C were recorded in the Rochdale borough, breaking previous records for the hottest July day and the hottest day ever since records began.

As rain battered the region this weekend, the high levels of rainfall also saw several roads closed in Rochdale and Greater Manchester Fire and Rescue Service inundated with reports of flooding.

With the Met Office issuing in excess of 20 flood warnings for Greater Manchester, crew in all corners of the county were called upon to assist the public with the boroughs of Manchester, Oldham, Rochdale, Stockport and Tameside hit the hardest.

A large number of calls came from concerned residents whose cellars and basements were flooded while there were a number of people whose vehicles had become stranded in flood water.

In neighbouring Whitworth, Station Road, Millfold, John Street, the football ground, Daniel Street and surrounding areas were affected with some properties having been evacuated.

Rochdale Borough Council confirmed on Monday that a small number of businesses in Rochdale town centre had experienced flooding in their cellars, and that some homes had been affected, including Gower Street and Turf Hill Road.

A spokesperson for the council said: “We had a small number of road closures across the borough and our crews were out clearing gullies in various locations into the early hours.

“We also visited areas including Gower Street and Turf Hill Road, where the fire brigade also attended, to support residents, and we will do follow-up visits to make sure people are getting what they need.”

Flooding also affected businesses in the Dale Street and Kiln Lane area of Milnrow, with firefighters pumping water from the cellar of a pub and carpet showroom, as well as the roadway, into the nearby River Beal.