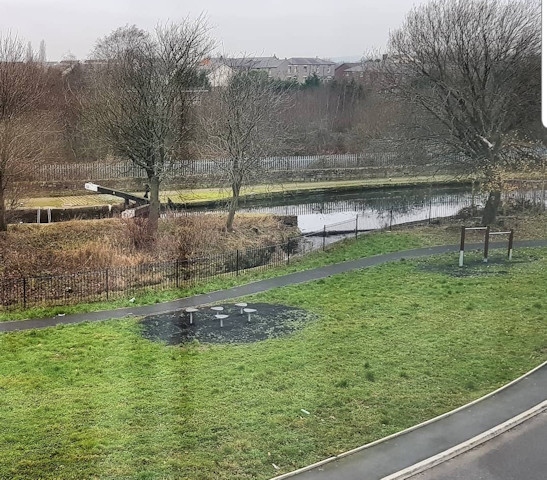 Residents of St Martin’s View in Castleton have formed a group to dispute maintenance charges being applied for public areas on the estate by RMG, after management was handed over by Barratt Homes.

The tenants say they were advised management fees would be approximately £100 per year, yet they say some residents have been asked for £115, and those with a private parking space (rather than a driveway) are being asked for £205.

The charge was expected to be an annual payment, due in October, but is now being asked for on a monthly basis.

The tenants continue to remain frustrated over a year after concerns were raised about the “utter disgrace” play area near the Ark Royal area of the estate.

They said: “We were told it would be safe for children to play without parents’ apprehension. On completion, the park is nothing as stated by Barratt Homes.

“There are a few stumps poking out of the ground and the area under each piece of apparatus has been covered with rubber grass mats.

“These mats contain holes and are not flat; in our opinion, they do not offer much support during a fall. The grass has not been maintained around these mats, making them difficult to see and navigate whilst walking on them, creating a trip hazard.

“The grassy area is uneven and contains a mound at least two-foot high, making it impossible for the children to play football, cricket or other games. We are also concerned that the grass has been laid on layers of red brick and rocks.

“The Barratt Homes development in Eccleston Park, Chorley, is equipped with a playground far superior to the one which we have been provided with, and those residents are not expected to pay a service charge.

“We do not have fencing around our playground to separate the play area from traffic, meaning we are unable to allow our children to play on the park unattended as they have free reign to run into the road. The grassy areas are bald in places and many shrubs and weeds are overgrowing into the playground from the canal bank.

“The park is unsafe, not as described and not fit for purpose. We feel that these works have not been carried out to a reasonable standard and should be rectified at no additional cost to the residents.”

The residents also feel that many of the itemised service charges they are being asked to pay are “unjust and unnecessary”, such as general repairs and maintenance, playground costs, sundry expenses, audit and accountancy fees, grounds maintenance, health and safety, and public liability insurance.

One resident added: “We are pushing this is to try and make others aware of the ways Barratt’s and their subsidiaries are exploiting customers in terms of leasehold and maintenance charges and also hopefully to make contacts with others in a similar situation.

“We are aware that the government are planning to take action against leasehold issues in the future, which is probably too late for us, but it might achieve something.”

A spokesperson for RMG said: “We manage the private scheme on behalf of Barratt Homes. We are aware of the concerns regarding the costs of running the unadopted areas and we will be in touch with the residents to address their queries.”

A spokesperson for Barratt Homes Manchester said, “We are sorry that the residents at St Martin’s View have some concerns about the development. We will be responding directly to the points raised in their letter and RMG have been asked to organise a meeting with the residents to discuss the issues raised.”

“We aim to be clear and transparent to all of our customers. Information on the management fees was provided to all customers on the purchase information sheet which is shown at the point of reservation. All customers also have access to independent legal advice throughout the buying process.”

MP Liz McInnes and the leader of Rochdale Borough Council, councillor Allen Brett have also been contacted for comment.

A residents' meeting will be held at 7pm on Monday 19 August, at Royle Bowling Club on Manchester Road.