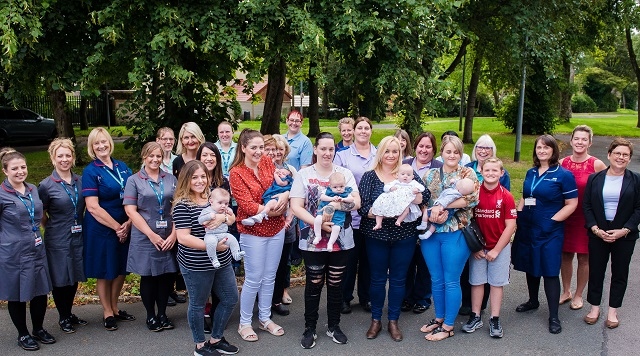 Following the launch of an innovative Smokefree Pregnancy programme twelve months ago, the number of pregnant women in the city-region who smoke is falling faster than the national average.

Maternity staff and new and expectant parents gathered at Ingleside Birth Centre in Swinton on Thursday to celebrate the first successful year of the Greater Manchester Smokefree Pregnancy Programme.

Official figures show that, whilst across the country the percentage of women smoking at the time of delivery was the same as last year, in Greater Manchester this had fallen.

The decline in smoking during pregnancy has contributed to overall smoking rates across the city region falling twice as fast as the national average, to a record low of 16.2%. There are 46,500 fewer smokers in Greater Manchester than in 2016.

Sarah Price, Director of Population Health for the Greater Manchester Health and Social Care Partnership said: “Smoking during pregnancy harms your baby. We need to do everything we can to support expectant parents to stop smoking, for their health and for the health of their unborn child.

“Pregnancy can be a very stressful time, which can make it especially difficult to quit smoking. We know that, like all parents, parents who smoke want the best for their children but can struggle to kick their powerful addiction to tobacco.

“These figures show that, with the right support, expectant parents are quitting and children are getting the best possible start in life.”

Expectant parents engaged in the Smokefree Pregnancy programme, which has been introduced across the city region, are tested for carbon monoxide levels early in their pregnancy. This allows maternity staff to identify smokers and educate them on the potential harm being done to their unborn child.

Pregnant smokers are then provided with specialist support to help them quit, including free nicotine replacement therapy to help them deal with cravings. The Smokefree Pregnancy Programme has trained midwives and midwifery support workers to help expectant smokers.

Eligible expectant parents who quit smoking successfully are offered shopping vouchers to help them prepare for the arrival of their new baby. This approach has proved successful with some of the most addicted smokers, offering one more reason to quit.

Smoking during pregnancy significantly increases the risk of stillbirth, premature birth and cot death. Babies whose parents smoke are also more likely to be born seriously underweight, which can lead to developmental problems and poorer health in later life. They are also at greater risk of asthma and other serious illnesses that may need hospital treatment.

Anyone planning a pregnancy is advised to seek support to quit smoking before conceiving by going to:

Anyone who is already pregnant and wants to quit smoking can talk to their midwife or maternity support worker to access support.

The Greater Manchester Smokefree Pregnancy Programme is an important part of the city region’s ambitious population health plan. Backed by an investment of £30 million over five years and supported by powers gained through devolution, the Greater Manchester Population Health Plan is improving health and reducing inequalities for the area’s 2.8 million residents.