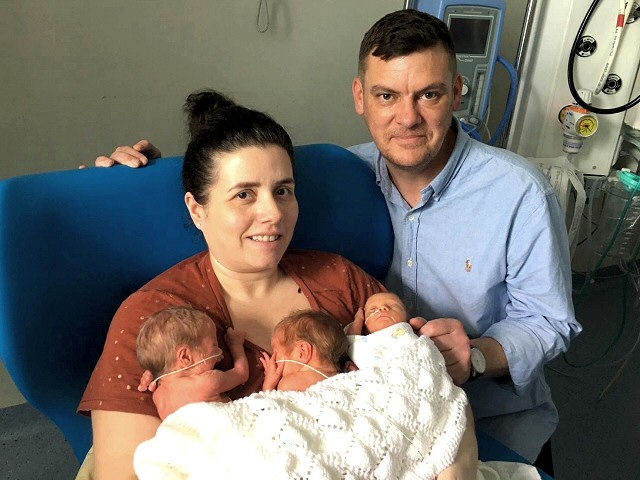 Mum and dad, Elise Mitchell and Paul Taylor, with the triplets Lucy, Lily and Arthur

A couple from Rochdale welcomed triplets to the world on Thursday 15 August 2019.

Born at Royal Oldham Hospital, Elise Mitchell and Paul Taylor welcomed their three babies – Lily and Lucy, two identical twin girls, and a son, Arthur via C-section at 11.27am, 11.28am and 11.30am.

Weighing a tiny 2lb 13oz, Lily was the first and the smallest of the triplets to be born, followed by her twin sister Lucy, weighing 3lb 8oz and brother Arthur, the biggest of the three, weighing 3lb 15oz.

Dad Paul said the news of the naturally conceived triplets came as a shock to everyone.

He said: “Elise had surgery a few years back and was told she couldn’t have any more children.

“We already have three beautiful children between us from our former relationships, so we came to terms with it and thought OK it’s not a problem.

“It was at the start of this year when Elise didn’t feel quite right, so she went to see the doctor and they thought she might be suffering with an ectopic pregnancy [when a fertilised egg implants itself outside of the womb]. I joined her when she went for an ultrasound scan a few weeks later in February and we were told that she was actually pregnant with twins!

“When she was ten weeks pregnant, she was booked in for another scan just to be safe, which unfortunately I couldn’t attend with her. When I got home, I asked how it went and she said ‘well it’s not twins’ and that’s when I found out we were having triplets!

“It was a total shock, no one could believe it, especially since Elise was told it was highly unlikely for her to have any more children."

Paul added: “The babies are currently in the neo-natal intensive care unit at Oldham and everything is going really well.

“The staff at all the departments we’ve visited over the past few months have been second to none. Everyone has been absolutely wonderful, and we’ve had fantastic support all the way through.

“We’re so very lucky and we’re looking forward to getting our other children involved, as they haven’t met their new sisters and brother yet.”