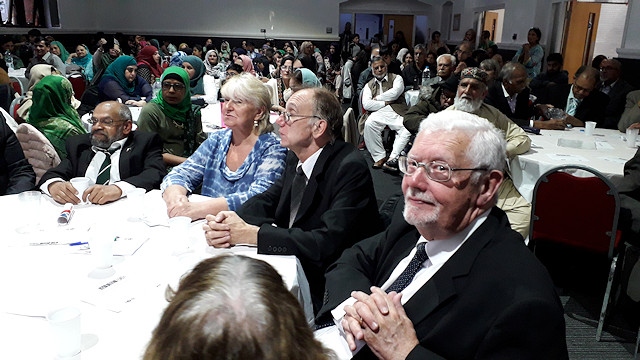 Among those who attended were Mayor Billy Sheerin, Rochdale MP Tony Lloyd, Heywood and Middleton MP Liz McInnes, councillors, representatives of various organisations and members of the local community.

Ghulam Rasul Shahzad OBE, Chairman of Action for Pakistan International, which organised the event, welcomed all distinguished guests and members of the community for their attendance, and Qari Abdul Rauf recited verses of the Holy Qur’an.

Mohammed Sarwar of the Centre of Wellbeing, Training & Culture, members of the Pakeeza group, children and members of the Action for Pakistan International, joined in singing the national songs of Kashmir and Pakistan.

Pakistan Independence Day commemorates the declaration of Pakistan as a sovereign nation, following the end of the British Raj in 1947 and is a national holiday in Pakistan. Because of the grave situation in Indian-administered Kashmir, the Government of Pakistan and overseas Pakistanis and Kashmiris are observing the day as ‘Kashmir Solidarity Day’.

They expressed their concerns on the current situation in Indian-administered Kashmir. The Indian government recently decided to strip the state of autonomy after seven decades, meaning it can no longer make its own decisions, and will have to abide by the Indian constitution. A further decision by the Indian government means only Kashmiris can buy properties in Kashmir.

Kashmir was divided between India and Pakistan by the Line of Control in 1947: the northern territories of Azad Kashmir and Gilgit-Baltistan are Pakistani-administered, whereas the southern territory Jammu and Kashmir is Indian-administered.

Since partition, 800,000 Indian soldiers have been deployed, with the area recently coming under siege after the Indian government revoked Kashmir’s special status.

Millions have recently been left without food or medicine, with no outside communication in an unprecedented communications blackout and curfew since the region was stripped of its autonomy.

An estimated 2,300-4,000 people, mostly young men, have been recently arrested in the region, with tens of thousands of Kashmiris killed since partition.

The evening ended with Mayor Billy Sheerin and Mr Shahzad thanking the audience for supporting the Mayor’s charities and thanked them for their donations.