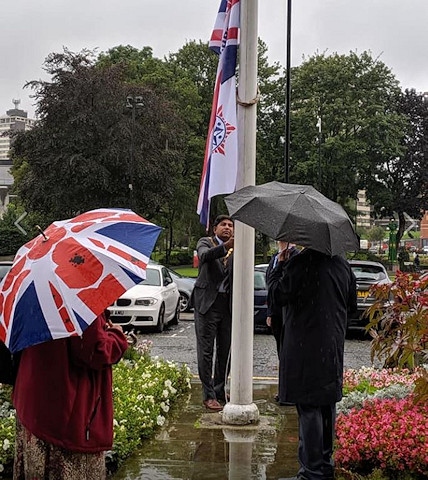 A flag raising and a two minutes’ silence was held at Rochdale Town Hall on Monday (9 September) to mark Emergency Services Day.

The Emergency Services Day began at 9am on Monday 9 September (9th hour of the 9th day of the 9th month) with two minutes’ silence to remember the thousands of emergency services personnel killed as a result of their duties.

The national event first started in 2018, as part of the National Emergency Services Memorial registered charity. The first national memorial is being launched to commemorate the lives of police officers, fire fighters, paramedics, coastguard and search and rescue services killed in the line of duty.

The flag was raised by Deputy Mayor, Councillor Aasim Rashid.

Chief Inspector Andy Riley, from the GMP Rochdale Division, said: “I am very grateful for the recognition and thanks expressed today, remembering that the work we do is part of a wider team effort, involving not just police officers, firefighter and paramedics, but many other members of staff and volunteers, who work for all three of the emergency services to help keep people safe.

“In return, I would like to thank the community for their continued support, as without this we could not work as effectively.”

Local paramedic, Jeffrey Tomlinson said: “There’s a real sense of satisfaction when you can reassure and help people who are understandably concerned and anxious when they come into contact with you. It’s such an important part of our role in the emergency services.” 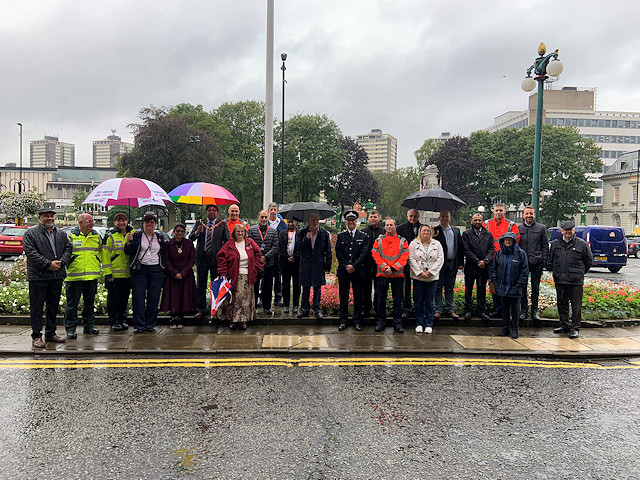 Referencing Monday's fire at Mardyke block at College Bank Way, Rochdale town centre, Duncan Millington, Watch Manager for Heywood and Littleborough, said: “It’s poignant that on this day when we reflect on the importance of the emergency services, an incident is unfolding so close by.

“It demonstrates how thousands of emergency services staff work every day behind the scenes, often unnoticed, so people can go about their daily business safely.”

Following the fire, a 57-year-old man is in a critical condition with serious burns, which also saw seven residents treated at the scene for smoke inhalation.

Ten fire engines from across Greater Manchester attended the 1am incident, along with several special appliances, as well as officers from GMP and the North West Ambulance Service.

A 42-year-old man and a 30-year-old woman have been arrested on suspicion of arson with intent to endanger life. They remain in custody for questioning.

Councillor Janet Emsley, cabinet member for neighbourhoods, community and culture and lead member for the armed forces at Rochdale Borough Council, said: “We sometimes forget that our emergency services have also been on the frontline during periods of major conflict, like World War II.

“Many of them lost their lives during these conflicts, but this is not reflected in the statistics. This is why events like this are so important, so we can remember the sacrifices they have made and continue to make every day.”