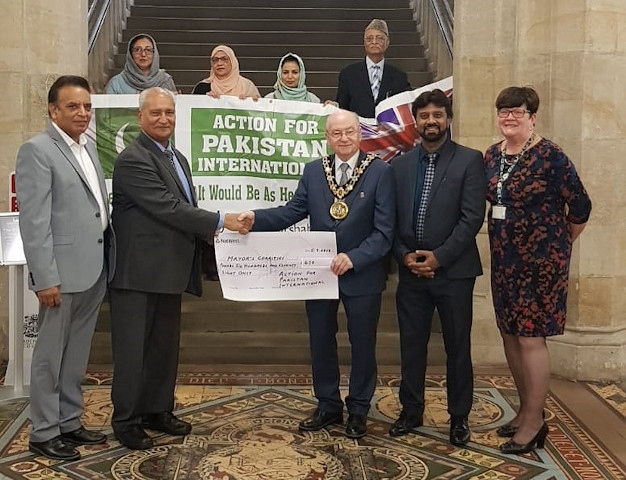 Ghulam Rasul Shahzad OBE, Chairman of Action for Pakistan International, presents Mayor Billy Sheerin with one of the two cheques

The Mayor’s annual fundraising dinner in August has raised £1,000 towards the Mayor’s charities.

Members of Action for Pakistan International (AFPI) met with the Mayor of Rochdale, Councillor Billy Sheerin, on Thursday (5 September) and presented two cheques totalling £1,000 to him.

The amount was raised at the Mayor's fundraising dinner on Pakistan Independence Day held at Castlemere Community Centre on 14 August.

Ghulam Rasul Shahzad OBE, Chairman of Action for Pakistan International, praised support from sponsors over the years and members of the AFPI, highlighting the projects they have been involved in for many years serving members of the local and international community in Pakistan and other countries.

He thanked the Mayor, MPs and councillors for their attendance and all the participants on the day.

Action for Pakistan International has organised the dinners in the past, raising money and donating the funds to former mayors.

He said the council and people of Rochdale have been supportive of the twinning of Rochdale and Sahiwal in Pakistan, including the projects developed in Sahiwal.

He added: “I hope the Pakistani community will continue to work with all communities in the borough and support the charities.”