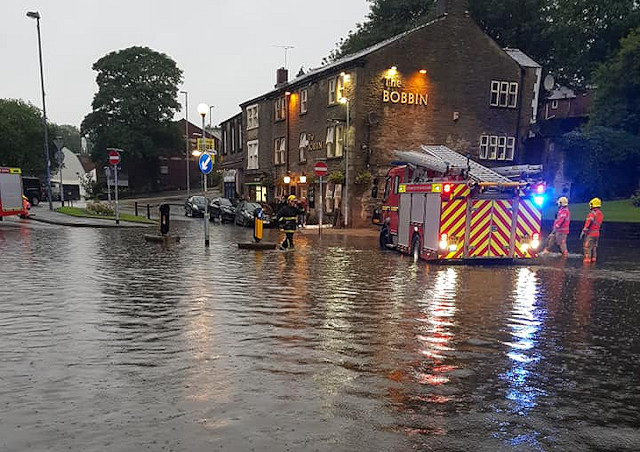 Flooding outside the Tim Bobbin in Milnrow in July 2019

This summer broke a number of records in the Rochdale borough.

July brought record-breaking temperatures on Thursday 25 July, as a high of 32.7 °C was reached - the hottest day in the borough since records began.

The hottest day ever recorded in the borough previously was on 9 August 2003, when the mercury reached 31.2°C.

The late August Bank Holiday weekend smashed local records, with the temperature reaching a high of 29.5˚C on Sunday 25 August in the Rochdale borough.

The previous highest temperature on record in Rochdale for the August Bank Holiday was 23.8˚C, recorded in 2001, 5.7˚C cooler than this year.

For Bank Holiday Monday, the mercury hit 25.1˚C, beating the previous highest temperature on local record of 23.1˚C, recorded in 2013.

Nationally, the August Bank Holiday weekend of 2019 has been recorded as the hottest on record.

July 2019 was also declared as the wettest on local record by the Met Office, with 196.6mm of rain recorded for the month of July, the most rainfall since records began in 1949.

The last weekend of July was wetter in the borough than anywhere else in the country, as more than a month’s rain fell in just 48 hours.

According to the Met Office’s National Climate Information Centre, summer 2019 was the twelfth warmest on record since 1910 across the UK, and was 7th wettest overall for the same time period.

Additionally, the Met Office confirmed that this summer was one of the wettest on record for Lancashire, including Rochdale.

A spokesperson said: “We work in historic counties in the shape they were in 1910, so we have figures for Lancashire.

“This summer Lancashire has seen 406mm of rainfall, which puts it eighth in the list since 1910.