Government pressed on Kashmir crisis by local MP and MEP 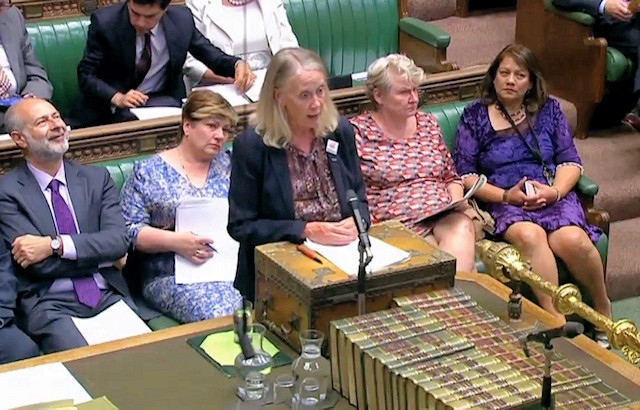 Liz McInnes and Theresa Griffin, the MP for Heywood and Middleton and MEP for the north west respectively, are calling for the Kashmir crisis to be resolved.

At the Foreign and Commonwealth Questions in the House of Commons last Tuesday (3 September), Ms McInnes took the opportunity to question the Secretary of State for Foreign and Commonwealth Affairs, Dominic Raab, further on the government's response to the situation. In particular, she asked what measures were being taken in regard to the 4,000 Kashmiris who have been detained without charge.

She said: "Alongside the revocation of Article 370, the Indian authorities have detained more than 4,000 Kashmiris without charge in the last month - not just political activists, but ordinary civilians."

"There are widespread allegations of torture and many families do not know where their loved ones are being held. This is no way for the largest democracy in the world to behave, let alone a member of the Commonwealth."

She went on to ask Mr Raab to clarify what protests he has made about these detentions.

In response, Mr Raab said: "The concerns and issues she has raised are very serious. I raised them directly with Foreign Minister Jaishankar on the 7th August. And to answer the Shadow Foreign Secretary's point, yes, specifically the issue of detention as well as the blackouts, we've made clear our concern and that we need to see, particularly with a great democracy as she says, that intentionally recognised human rights are respected.”

Both Ms McInnes and Ms Griffin have written separate letters to the Chair of the Foreign Affairs Select Committee to consider holding an urgent inquiry into the ongoing crisis in Kashmir, and the EU’s High Representative for Foreign Affairs, Federica Mogherini, calling for the EU to use all the tools at its disposal, including withholding trade deals, as part of a co-ordinated international approach to resolve this issue.

Ms Griffin said: “The situation in Kashmir has been exacerbated by the sending of yet more troops, the expulsion of foreign visitors, including media, and a media and communications lockdown, with even internet and telephone access being cut off.

“This is an unacceptable situation and I will continue to push for India to cease its lockdown of Kashmir and support the Kashmiri right to self-determination.”

On 5 August, India's Prime Minister Narendra Modi announced the decision to revoke Article 370, a clause in the country's constitution that grants Kashmir special status and allows it to pass its own laws. Since then, there have been widespread reports of state-imposed curfews, banned protests, unlawful detentions and communication blackouts.

Ms Griffin’s letter asked for the EU to adopt the following position:

In her letter, Ms McInnes said: "Given the recent unilateral action taken by the Government of India to revoke Article 370, removing the special status of Kashmir and heightening tensions within the region and between India and Pakistan, I am writing on behalf of the Shadow Foreign & Commonwealth Affairs team to request that the Select Committee considers holding an urgent inquiry into the situation."

In response to Ms McInnes’ letter, the Chair of the Committee, Tom Tugendhat MP, wrote to Mr Raab, asking him to outline the Government's position on the situation and what steps the Government is taking to reduce tensions between India and Pakistan.

Ms McInnes initially wrote to Mr Raab last month on the outset of the latest crisis in the region. Yet no response was received. Subsequently, Ms McInnes decided to contact the Foreign Affairs Select Committee.

The Secretary of State responded to Mr Tugendhat's request for a response by 31 August. In his letter, Mr Raab acknowledged the UK's unique position to influence the situation thanks to its long-standing friendship and links through diaspora communities.

He then went on to say that it was not the UK's place to prescribe a solution and that a resolution must be reached through bilateral, peaceful negotiations between India and Pakistan.

The July 2019 UN Human Rights Report on Kashmir highlighted the Indian army in Kashmir acting with legal impunity, facing no legal consequences for using pellet guns as a means of crowd control despite them blinding and even killing children, nor needing to face charges for the numerous allegations of sexual violence, abductions, or attacks on journalists.

On Monday 2 September, the EU's committee on Foreign Affairs demanded that India's Prime Minister immediately lift the curfew in Kashmir.

Liz McInnes MP speaking in the House of Commons about Kashmir