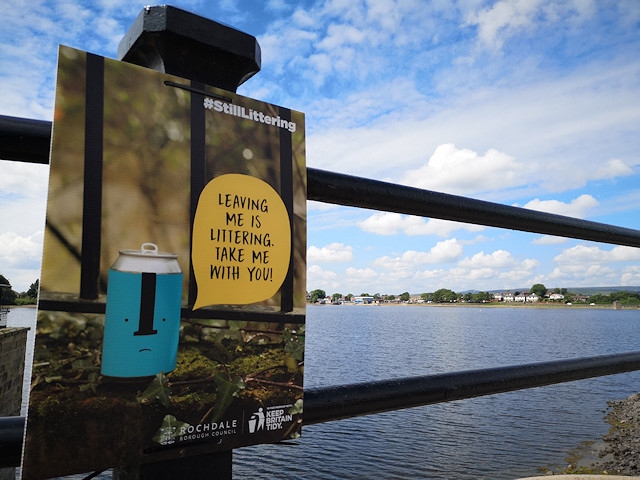 Can poster in place at Hollingworth Lake

Rochdale Council is rolling out its #StillLittering campaign across the borough after a successful trial at Hollingworth Lake.

In order to tackle the ‘careful’ littering that was affecting the lake, Rochdale Council joined forces with environmental charity Keep Britain Tidy to pilot a new scheme and is now set to expand the campaign to town centres across the borough.

Careful littering is the term used to describe items like cans being left in plant pots or sandwich wrappers being abandoned on park benches. In a survey carried out for Keep Britain Tidy by YouGov, more than one in four people (27 per cent) admitted to ‘carefully’ littering.

Though littering has continued at Hollingworth Lake, the month long intervention has reduced litter collected from around one of the region’s best-loved beauty spots from 15 bags on a weekend in June to 4 bags in July.

Britain is Europe’s largest consumer of food and drink on the move so it’s no surprise that according to the Campaign to Protect Rural England the three most common objects collected while litter-picking are fast-food packaging, confectionery wrappers and soft and alcoholic drinks bottles made from plastic, tin or glass.

The campaign was developed to tackle the moments when people might carefully place litter on the ground or a surface before walking away and leaving it and the advertising offers a gentle reminder that, whether it is ‘carefully’ placed or simply thrown on the floor, it’s #StillLittering.

The campaign will see stickers being added to shop windows and posters on display in Littleborough, Heywood, Middleton, Milnrow and Rochdale town centres and an increased enforcement presence to help tackle this littering behaviour.

Town centre wardens will be starting the campaign with a week of action from 16 September which will see a clamp down on the littering of waste and cigarette ends. In February enforcement officers were given rights to issue a fixed penalty notice for littering of £150, previously £75.

Councillor Neil Emmott, the council’s cabinet member for environment, said: “Residents and local businesses have told us very clearly that they want clean streets and a comfortable environment to spend time and shop.

“Littering, and dog-fouling for that matter, aren’t tolerated here. Placing that coffee cup on a bench is just as bad as mindlessly throwing litter on the ground and this pilot has highlighted that it is possible for a simple campaign to make us think twice and make a big difference to the amount of litter left behind by people.”

Nathan Sweeney, co-owner of Deuce café in Heywood, is backing the campaign and added: “Keeping our streets clean in a no brainer. It’s healthier for us and better for the environment. There’s too many people littering and it’s sending the wrong message to our children when, as adults, they copy what we do.”