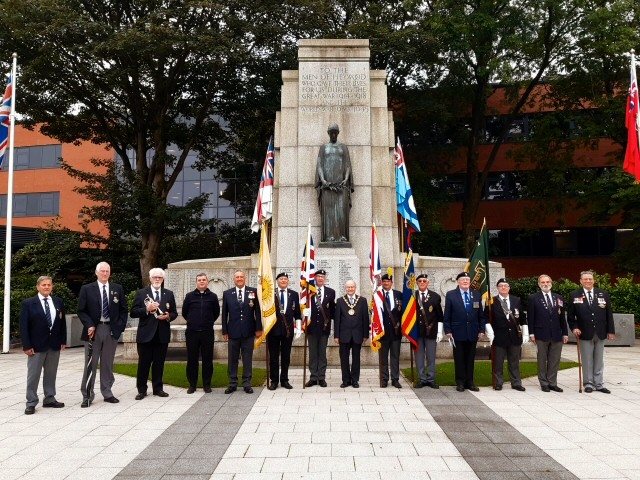 A special remembrance service was held in Heywood on Tuesday 3 September.

Hosted by the Lancashire Veterans Association (LVA), the service marked both the 80th anniversary of the start of World War Two whilst acknowledging the contribution made by Britain's merchant fleet to both World Wars.

The service was kindly conducted by Father Michael and, despite a packed schedule, the Mayor of Rochdale, councillor Billy Sheerin, also took time to attend and give support to the veterans and the families who gathered there.

Chairman of LVA, Harry Mills, said: “In addition to thanking all of the above I would also like to thank the standard bearers and representatives of various veteran associations, some of whom had travelled a considerable distance to attend.”

Bells at St Luke’s Church were rung 80 times in memory of the start of World War Two.

Following the service, the Queen Ann pub was the venue for 'a toast to absent friends' before people moved along to The Heywood for a traditional sing-along to raise the spirits.

Mr Mills added: “It is heartening to see how the people of Heywood continue to ensure that they honour the memory of those who suffered or died in the cause of peace and their sacrifices are never forgotten.”