You are Here: Home » News » News Headlines » Former mayor calls for surviving D-Day veterans and their relatives to apply for French Legion of Honour medal 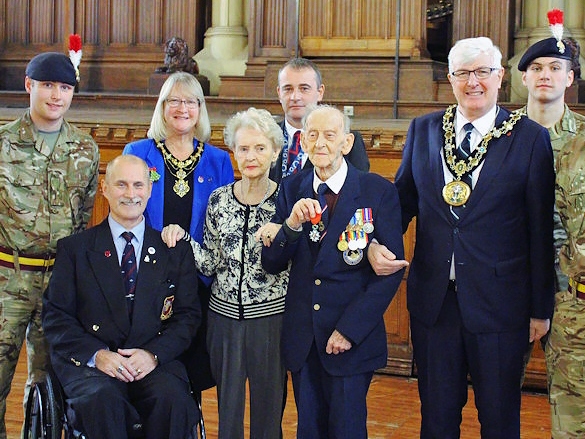 Former Mayor Ian Duckworth is calling for all relatives of D-Day veterans and those who fought in the campaign to liberate France to apply for the prestigious Légion d’honneur medal if they do not already have it.

Mr Duckworth, who retired from the armed forces himself in 1988, said: “All D-Day veterans are entitled to receive this prestigious award, which is also known as the Legion of Honour.

“There are people who are entitled to the award who are unaware that they qualify or even of its existence. If just one person receives this as a result of this article, it will be worth it.

“All they have to do is to contact the Ministry of Defence and they will guide them through the process.”

Mr Duckworth, the Mayor of Rochdale between 2017 and 2018, presented then-92-year-old Middleton veteran, William Wild with the honour during his mayoral year.

Established in 1802 by Napoléon Bonaparte, Ordre national de la Légion d'honneur is the highest French order of merit for military and civil merits, retained by all the divergent governments and regimes later holding power in France.

It can be awarded to all British veterans who fought for the liberation of France during World War Two between 1944 and 1945.

An application form is available for any veterans, including Royal Navy and Royal Air Force personnel who operated in support of the landings, who have not already received this award from the French government.