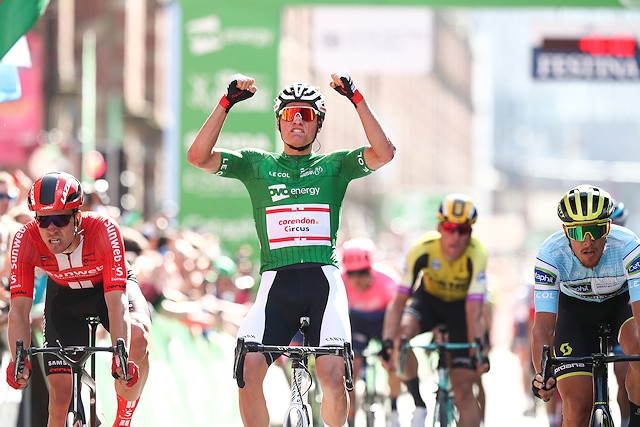 Mathieu van der Poel reiterated his billing as the hottest talent in professional cycling on Saturday (14 September) as he was crowned the 2019 OVO Energy Tour of Britain champion in Manchester.

The 24-year-old Dutchman sealed his victory in style, sprinting to win the eighth and final stage of this year’s race after a frantic day of racing around all 10 Greater Manchester boroughs, including Rochdale.

“It wasn’t an easy day; a lot of teams tried to attack us,” said van der Poel.

“Coming into Tour of Britain, I didn’t really think it was possible because of the time trial which I hadn’t done in a really long time. But after the time trial I started to believe I could win the GC, but it was harder than I thought it would be and I’m really happy with the feeling also today and it’s been a good week for us.”

Van der Poel went on to praise the work of his Corendon Circus teammates, saying: “They’ve really over done it I think, really, I’m proud of them. We are not the biggest team here, but they gave everything they had, also after the steep climb we were still three riders in the first group, and they did an amazing job after yesterday.”

While Corendon Circus and the Jumbo Visma team of triple stage winner Dylan Groenewegen initially did well to control the breakaway of Matt Holmes (Madison Genesis), Gabriel Cullaigh (Team WIGGINS Le Col) and Emil Vinjebo (Riwal Readynez), but the race erupted into life on the infamous climb of the Rake above Ramsbottom.

Pavel Sivakov sparked proceedings into life on the slopes of the Rake, with his Team INEOS teammates taking up the mantle with a flurry of attacks across the moors north of Manchester.  Movistar’s Andrey Amador was the main beneficiary, building a 49 second lead at one point before being reeled back in by the pace of the reduced front group.

With 25 kilometres remaining INEOS’ Michal Golas was joined off the front by Larry Warbasse (AG2R La Mondiale) and Mark Christian (Team WIGGINS Le Col) but their lead only lasted until the 10 kilometre mark as the Tour raced through Salford, setting up a thrilling finish on Deansgate.

It was Team Sunweb’s Cees Bol that picked up the sprint coming out of the final left-hand turn onto the long finishing straight, with van der Poel coming around him to just hold off the fast finishing Trentin.

British domestic teams took home both the SKODA King of the Mountains and Eisberg Sprints jerseys, as Jacob Scott (Swift Carbon Pro Cycling) confirmed his victory in the former, two years on from having agonisingly lost the same jersey on the final day of racing.

Townsend’s win of the jersey also rounded out a successful week, having been called up to the Irish squad for the road World Championships in Yorkshire at the end of the month.

Highlights of Stage Eight are available on demand via the ITV Hub catch-up service.