You are Here: Home » News » News Headlines » Rochdale festival will make you think

Rochdale festival will make you think 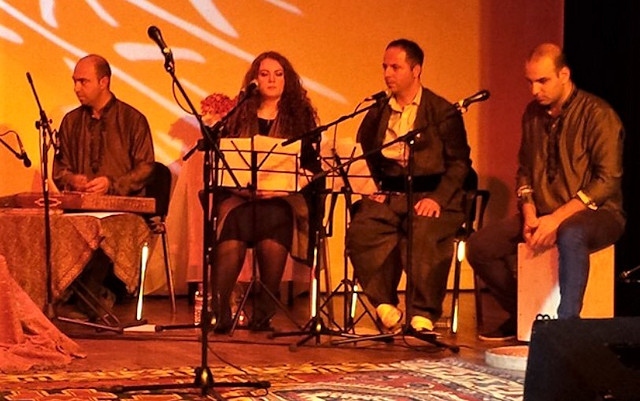 This Saturday at 12pm at Touchstones Rochdale there’s a pre-festival performance in partnership with the Muslim Arts and Culture Festival. The magic of the much celebrated poet Maulana Rumi’s ‘Alchemy of Love’ will be performed.

With just two weeks to go before this month’s Rochdale Literature & Ideas Festival, there are only a handful of tickets left for many events with some events already sold out.

It promises to be the most fascinating and diverse line-up yet for the festival which runs from 14 to 21 October, with over 30 events.

This Saturday at 12pm at Touchstones Rochdale there’s a pre-festival performance in partnership with the Muslim Arts and Culture Festival. The magic of the much celebrated poet Maulana Rumi’s ‘Alchemy of Love’ will be performed by artist and singer Gulcin Bulut and the Sahba Ensemble. Persian poet Rumi has fired the imagination of millions of readers worldwide as the supreme poet of love and is known as the Islamic world’s Shakespeare.

On Tuesday 15 October at Rochdale Sixth Form College Theatre the philosopher, writer and renowned speaker Jules Evans will be talking about ways to find a new lease of life by ‘thinking outside the books’. The best-selling philosopher is a co-organiser of the London Philosophy Club, the largest of its kind in the UK and he gives talks and workshops on his practical philosophy of suffering less and flourishing more around the world.

The ‘Women Who Write: Dystopia’ event on 16 October will feature bestselling author of end-of-the-world thriller The Last, and Fiona Shaw, author of YA hit Outwalkers, talking about the concept of dystopia (an imagined state or society in which there is great suffering or injustice), and the impact of female writers on the genre. Discussing the rise and revival of women-driven dystopian fiction, from Margaret Atwood’s 1985 novel-turned-weirdly-popular TV series The Handmaid’s Tale to Naomi Alderman’s recent award-winner The Power, this is set to be a thought-provoking evening at Touchstones.

If you are feeling stuck, frustrated or at a loss of where to go next with your writing, then a taster masterclass with top author Sophie Hannah is what you need. At The Royal Toby Hotel on 17 October Sophie will talk about how to thrive as a writer, whether you have completed a manuscript, haven’t quite started, or don’t even know what it is you’re going to write! Sophie’s books have sold by the million worldwide, and her psychological crime novel, The Point of Rescue, was adapted for television. Sophie is also the official author of the new Agatha Christie Hercule Poirot mysteries, including The Mystery of Three Quarters.

On Friday 18 October multi award winning American author Ivonne Battle-Felton will talk about her debut novel, ‘Remembered’. Set in 1910, it deals with segregation and slavery, telling a powerful and haunting story about understanding where you have come from, losing loved ones, and finding strength, belief and courage to survive. She is the recipient of a number of writing accolades, including the Northern Writer’s Award, and ‘Remembered’ was longlisted for the Women’s Prize for Fiction earlier this year.

200 years on from The Peterloo Massacre, Paul Magrs, Paul Fitzgerald (aka ‘Polyp’) and Eva Schlunke will talk about their work around this event at The Curtain Theatre on Saturday 19 October. Paul is the writer of Doctor Who: The Peterloo Massacre, an audio drama produced by Big Finish which saw the 5th Doctor (Peter Davison) travel back in time to the event. Polyp and Schlunke are the creators of the graphic novel, Peterloo: Witnesses to a Massacre, bringing a new dimension to the telling of this hugely important historical event.

On Sunday 20 October, Manchester playwright and performance poet Hafsah Aneela Bashir will be performing her latest work at the Rochdale Sixth Form College Theatre. Her debut poetry collection, The Celox and the Clot, was published last year. She has had 2 sold out one-woman shows at HOME Manchester and has recently been awarded the prestigious Jerwood Compton Poetry Fellowship. Her slam poem, ‘There No Such Thing as Islamophobia’ is available to on Youtube, and offers a fascinating insight into a young Muslim woman’s experience of Islamophobia in Britain.

Other guests at the festival that runs from 14 to 21 October include legendary broadcaster John Craven, feel-good fiction writer Milly Johnson, Gogglebox and Radio 2 star Reverend Kate Bottley, author and activist Erin Ekins and many more.

Councillor Janet Emsley cabinet member for neighbourhoods, community and culture, said: “We are so pleased to have such a rich programme this month in Rochdale. We have a wonderful collection of events and activities, exploring some fascinating themes. As well as the household names I do encourage everyone to really explore our line-up and see something a bit different. We hope you’ll find lots of ideas and inspiration this year, but above all, have a great time.”

The festival is aimed at celebrating and promoting the Maskew Collection of classic literature and philosophy at Rochdale Central Library, encouraging people to engage with books and ideas. Annie and Frank Maskew, a Rochdale couple who shared a passion for reading and thinking, met in Rochdale Library in the 1950s and left a sum of money to be used on resources and events related to literature and philosophy to ensure classic works are available for future generations.

The festival is organised by Rochdale Borough Council, supported by the Maskew Bequest and sponsored by creative digital media company - JGM Agency, The Royal Toby, and Rochdale Sixth Form College.