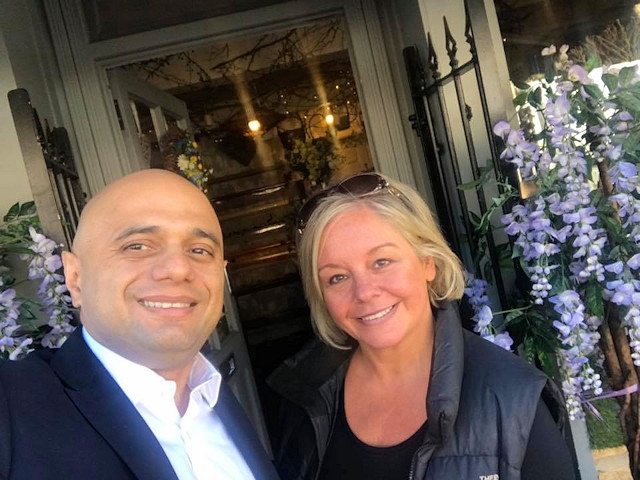 Chancellor of the Exchequer, Sajid Javid, and Garden of Eden owner, Christine Campbell

It’s not every day that the Chancellor of the Exchequer, Sajid Javid, pops into your shop to buy some flowers, but that’s exactly what happened for the Garden of Eden florists in Norden this week.

Following the Conservative party conference in Manchester, Rochdale-born Mr Javid called at Garden of Eden on his way to visit relatives, choosing a box bouquet of blooms.

Owner Christine Campbell said: “I saw all these guys in suits and blacked out cars outside, and I wondered what was going on.

“Mr Javid came into my shop with his entourage, and I recognised him straight away. He had detoured to visit an auntie after the Conservative party conference, and searched online for florists.

“He said mine came highly recommended, and that I was running a very successful business.

“He bought a lovely box bouquet of flowers for his auntie.

“It was a pleasure meeting him; he is a really lovely man.”

Mr Javid's father, Abdul, a bus driver, came to the UK from Pakistan in 1961, reportedly with just £1 in his pocket. He settled in Rochdale, where Mr Javid, born in 1969, and his four brothers were born.

Mr Javid, who has four children of his own, tells of how his father was a Labour supporter until the ‘winter of discontent’ of 1978-9, later becoming a supporter of Mrs Thatcher.

Similarly inspired by what he saw as a turnaround in the country's fortunes under the Conservatives, Mr Javid joined the party in 1988. He was appointed Chancellor of the Exchequer earlier this year.

Mr Javid became an MP in 2010, and became the first Asian male Conservative cabinet minister in 2014.