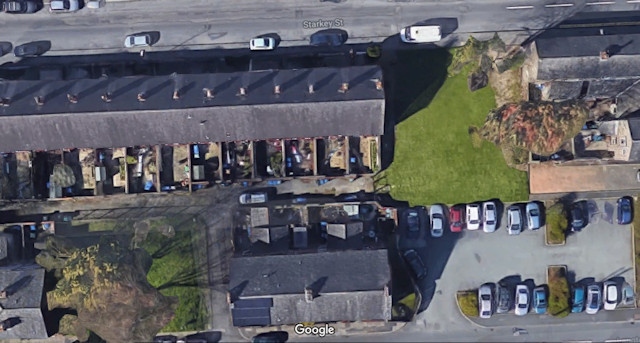 There had been confusion when Rochdale Council's cabinet voted to dispose of Langton Street Community Car Park, in Heywood, and its adjoining plot

A residential car park and the play area next to it have been saved after the council did a U-turn over plans to sell them off.

Members of the cabinet were told to think again after it emerged there had been confusion when they voted to dispose of Langton Street Community Car Park, in Heywood, and its adjoining plot.

The decision, which also involved the sale of land opposite Hilda Street, was taken to save the council maintenance costs and generate much needed cash.

But it was ‘called in’ by ward councillors Peter Rush and Liam O’Rourke, who said their objections had not been noted in an officer’s report.

Speaking at a scrutiny meeting last month, the pair said that losing the car park would deprive residents of a well-used facility and create ‘traffic chaos’ in the area.

They also told councillors that the grassy land attached to it was a popular play-area for younger children, and residents had expressed an interest in taking it on as a community asset.

This resulted in the decision being sent back to cabinet, with a recommendation to retain the car park and play area but proceed with the sale of land adjacent to Hilda Street.

This was approved at the most recent meeting of the executive.

Speaking after the meeting, Councillor Rush, chairman of Heywood Township Committee, said he was delighted the original decision had been reversed.

“We have a massive, massive problem in a gridlocked area which causes inconvenience to such a lot of businesses,” he said. “I’m very very pleased this decision has been favourable to us.”

Councillor O’Rourke said residents would be happy that cabinet had chosen to think again.

He said: “The car park will be safe now which means we are not going to create unnecessary traffic issues in the area.

“And it gives residents a bit of time to look at that piece of land (the play area) to see if they want to take it on as an endeavour, as a community asset.

He continued: “The most important thing is to sit down with residents to discuss what they want to do and take forward rather than (the council) putting things in place.

“It gives residents the initiative to get involved rather than the other way around”.

Councillor O’Rourke praised cabinet members for reconsidering their decision, and acting on the recommendations put forward by local councillors and residents.

“It’s just sad it got to that stage, but I’m glad it’s all been sorted out,” he said. “It shows that if we take a bit of time and look at things, sometimes we get a better outcome if we don’t rush headlong into things.”