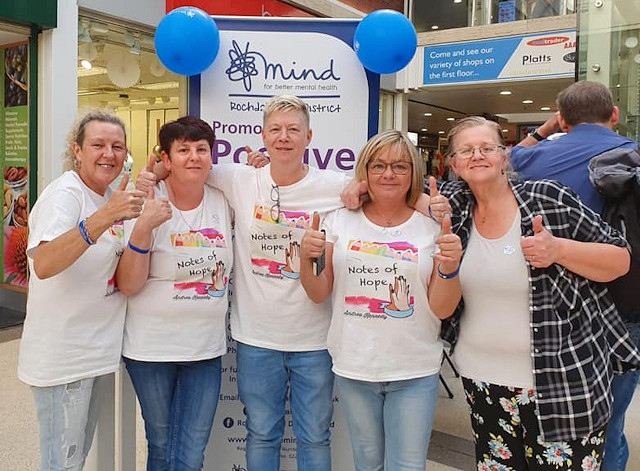 The ‘Notes Of Hope’ originated from local Middletonian Andrea Kennedy to get as many people involved as possible to show there is support for people who have mental health issues and are feeling low or suicidal. Andrea’s message was to ‘Shout out loud and show that people do care, and no-one more than Middleton folk!”

The day started at Middleton Shopping Centre where Andrea and her supporters, set up the Rochdale and District Mind information stand with the help of two staff members.

Information was given out on the charity’s projects, alongside merchandise that people could take for a small donation. Music was provided by talented guitar vocalist Sean Duffy, and then local busker Lee Smith throughout the day to get passers-by to stop at the event and enjoy the music, and donate where possible. 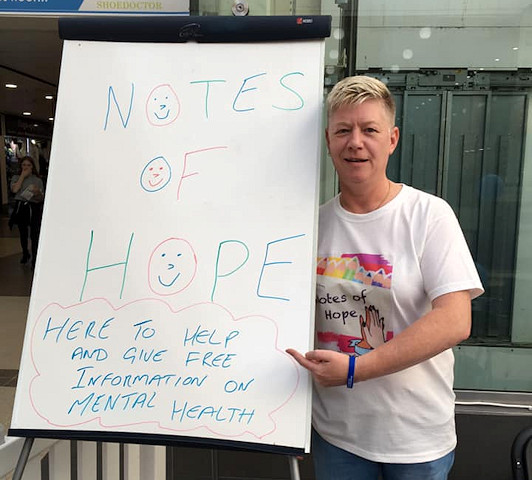 ‘Notes of Hope’ were completed for a small donation, which were then put on onto the M62, Junction 19 bridge later in the day.

From 7pm, The Friendship Inn on Cheapside carried on the entertainment with music being provided by Jupiter (aka DJ Julie), food and beverages.

Paula Hall, Fundraising Co-ordinator for Rochdale and District Mind, said: "A huge thank you to Andrea for organising the event overall, to all the supporters that helped Andrea before and during the day, and the wonderful people who have donated to our charity.

"We look forward to working with Andrea on her next event on Saturday 12 October."

Andrea has requested that the donation be split between Rochdale and District Mind's Young Open Mind project, Middleton Comple@t Café and their wellbeing services.